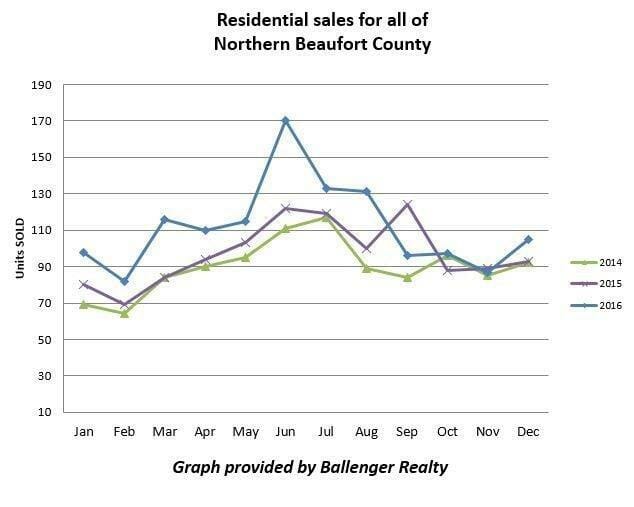 The first three quarters of 2016 were especially strong for real estate in Northern Beaufort County, excepting September, which was below last year’s sales number. We saw a similar dip in October 2015.

For us as a company, 2015 saw for the first time we equaled the sales volume we did way back in 2006. I suspect that many other companies and agents saw similar sales numbers as we did.

In 2016, unit and dollar sales volume have been well above 2015, and as can been seen by the excellent fourth quarter stats.

It is very encouraging to see numbers up all across the board – with the exception on the city of Beaufort and Port Royal – but even then they saw decent price increases.

The city of Beaufort saw a drop in sales volume of about 20 percent, and actual unit sales were down 12 percent.

But as mentioned, the city saw significant price appreciation, so one would assume some higher- end homes sold in this last quarter.

Mossy Oaks had some excellent results this quarter. We do not normally see such powerful moves in the well-established Mossy Oaks area, but again there must have been some larger homes sold for there to be an average increase of 78 percent, and median increase of 40 percent.

One caveat to consider, with only 18 unit sales, it does not take many high (or low) sales to swing the “average” and “median” prices one way or other.

It’s interesting that the two “cities” (Port Royal and Beaufort) were the only two areas that saw a decrease in volume and unit sales. Although again they saw a decent rise in property values, “average” up 8 percent and “median” up 9 percent.

Burton has been a real estate hot spot in Northern Beaufort County, usually only trailing Lady’s Island in performance.

Lady’s Island was again the area to beat. With only Mossy Oaks performing better, but with a lowly 18 unit sales, as opposed to Lady’s Island’s 83.

The increase of 48 percent in sales volume, and 30 percent in unit sales is quite impressive to say the least. Also of note is the “average” price of $313,094 (+15 percent) and the “median” price of $265,000 (+9 percent) over 2015. With all the new construction aon Lady’s Island, I feel we will be seeing some strong real estate numbers for some time to come.

We will review the whole real estate year of 2016 in next month’s article, but if the total year is anything like the last quarter of 2016, we all should be comforted that Northern Beaufort County is indeed back on track, but with nothing like the “craziness” of the mid 2000s.

Land sales are still lagging way behind residential homes, and there still are some outstanding deals to be had.

Only time will tell if land will ever catch up with home appreciations again.

Everett Ballenger is the former president of the Beaufort County Association of Realtors.

‘Beholding Nature’ to be featured at BAA Gallery