Editor’s note: This is part of an ongoing series of stories on the Nov. 8 general election.

On Tuesday, Nov. 8, voters will head to the polls to not only pick a new president, but also to cast their ballots on three local referendums. One of those is a tax hike to fund renovations at schools throughout Beaufort County and the construction of two new schools.

The Beaufort County School District board of education voted in April to place the 1-percent sales tax question on the ballot. That sales tax increase would be in effect for 10 years.

“This referendum will allow voters to determine the method of funding used by the district to meet its growing capital needs,” said board Chair Mary Cordray in a statement on behalf of the board.

Where would the money go?

State law prohibits any money raised from sales tax to be used for operation costs, such as salaries, instructional materials, supplies and other day-to-day costs.

Funds must be used exclusively for capital projects specified on the ballot, such as land acquisition, new schools, roof replacements, building additions and HVAC upgrades.

The list of projects for Beaufort County Schools include $112 million for the land and building of two new Bluffton-area schools; renovations and upgrades to nine buildings; roof replacements and water-proofing at 14 buildings; and HVAC updates to more than 15 buildings.

According to the board, the 1 percent sales tax would provide property tax relief. Revenues from the tax would be used to provide a credit in existing property taxes against existing debt service millage.

“We estimate that we could provide over a 42-percent decrease in all property owners’ existing property taxes on debt service,” reads a statement from the board.

In addition to the sales tax question on the ballot, a separate question asks voters to authorize the BCSD to issue up to $217 million in bonds.

Those bonds would be used to “jump-start” the amount of cash available to fund the construction and maintenance projects detailed in the sales tax referendum.

Revenue collected from the sales tax would be used to pay off the bonds.

The board’s rationale for issuing bonds is that the borrowing rate on bonds is lower than the rate of inflation.

“It makes sense financially to have more cash on hand available through bonds to speed up construction projects,” according to the board. “With inflation, the cost of building a school in two years will cost less than building that same school five years from now.”

In earlier presentations explaining the rationale for the sales tax, the board said that growth will need to be accommodated.

Recent U.S. Census data estimating regional growth between 2014 and 2015 identified the Beaufort/Hilton Head area as one of the 20 fastest-growing regions of the country.

A question not on this November’s ballot, but on the minds of many is the credibility and trustworthiness of the board itself.

It’s been a rough year.

Beaufortwatchdog.org, a whistleblower organization which earlier this year filed two ethical complaints against Moss, commented, “Our opinion is Moss has so damaged the credibility of the school district he couldn’t sell water to a thirsty man, never mind the1 percent tax.”

Additionally, during the process of presenting the sales tax to the community as a unified body, it was revealed that there was in-fighting among board members regarding whether some of the money raised from the sales tax increase would go to the University of South Carolina Beaufort and the Technical College of the Lowcountry.

“My focus is not going to be on the past but the future of the BCSD. Our board of education has revised and revisited our policies and administrative regulation so that there would be no misunderstanding in the future,” he said. “We have made much progress educationally in the BCSD in the last few years. Let us not turn back the clock.”

This November, the community will be able to demonstrate their trust – or lack thereof – in both the board and the proposed sales tax.

“Only voters can answer if the board should be trusted, and they will speak with their vote on Nov. 8 to the referendum and incumbents up for reelection,” said board member JoAnn Orischak.

In the meantime, the board will schedule numerous informational public meetings prior to the election to provide voters with facts relating to the projects and enrollment growth.

Details of the proposal for placement on the referendum ballot are currently available on the district website at beaufort.k12.sc.us. 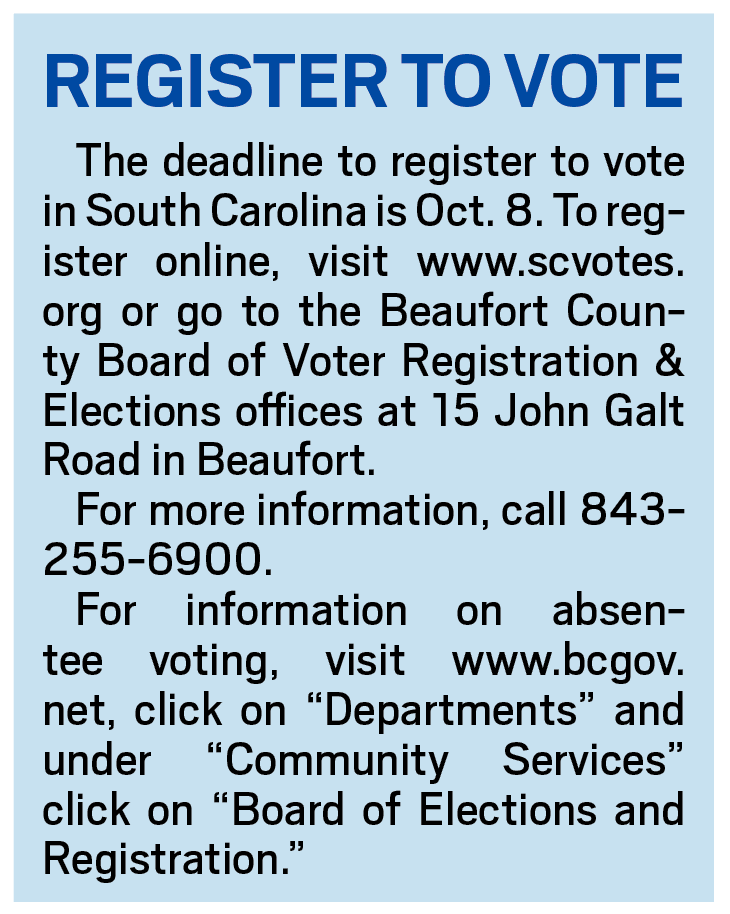 The Island News goes to press early Tuesday nights, therefore, we did
By Sally Mahan As part of our ongoing series on the local
Beaufort is my hometown and has been very good to me. When
I’m running for council because I believe in public service and I
Let’s get back to some common sense in government. As your former