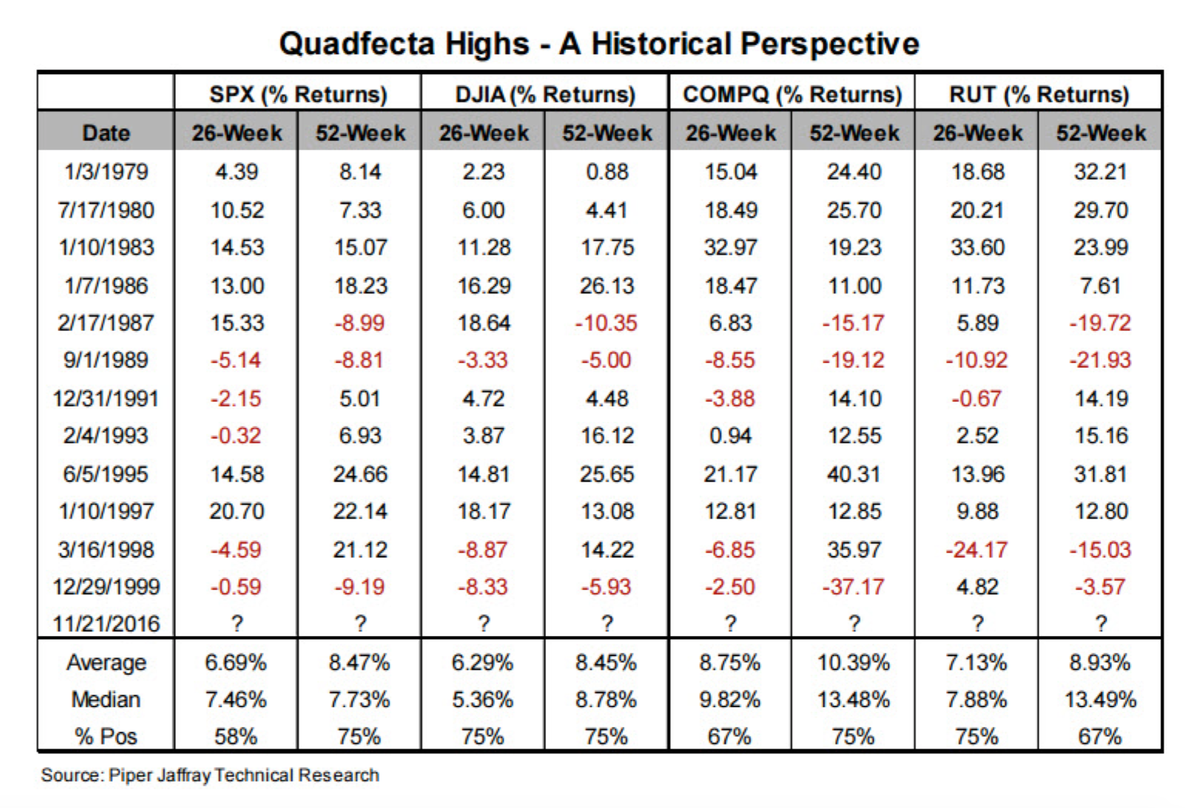 How uncommon is it to see the S&P 500, Dow Jones Industrial Average, the Nasdaq Composite and the Russell 2000 Indexes all break out to new all-time highs on the same day?

Piper Jaffrey’s December issue of “The Informed Investor” included a nice summary of the types of market returns we have seen after such “Quadfecta” days.

Following the Republicans trifecta sweep during the election, the popular averages posted quadfecta highs, representing the rare occurrence when the SPX, DJIA, COMPQ and RUT all close at record highs on the same trading day.

The recent November quadfecta highs was the first time this has occurred since December 1999.

From our perspective, the major averages simultaneously breaking out to new highs confirms broad participation in the rally and provides further evidence to our secular bull market thesis.

A historical review of other quadfecta highs offers compelling results in regards to expected future returns.

Although there are a limited number of occurrences since 1979, the major indices have generated meaningful returns over the ensuing 26-week and 52-week periods. Additionally, the percent of positive returns has far outpaced negative returns on a historical basis.

The table above highlights various return metrics after quadfecta highs have been reached.

As you can see, the SPX, DJIA and COMPQ traded higher 75 percent of the time on a 52-week basis. The RUT was higher 67 percent of the time after the same time period. Average returns also look healthy across the board with the major indices averaging at least 8 percent returns over the next 52 weeks.

Strong indications of healthy market breadth have historically tended to be a good sign for future equity returns.

This article was written by Dorsey Wright and Associates, Inc., and provided by Arthur Levin, managing cirector, TLS Wealth Management of Raymond James. Levin is a financial advisor with Raymond James & Associates Inc., member New York Stock Exchange/SIPC, located at 2015 Boundary St., Suite 220, Beaufort SC 29902. He can be contacted at 843-379-6100 or  arthur.levin@raymondjames.com or visit www.tlswealthmanagement.com

Opinions expressed in the attached article are those of the author and are not necessarily those of Raymond James. Raymond James is not affiliated with nor endorses the author or his firm. All opinions are as of this date and are subject to change without notice.