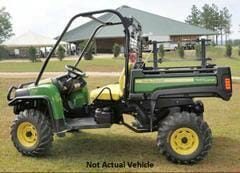 The Beaufort County Sheriﬀ’s Oﬃce is attempting to locate a dark green John Deere 625I Gator that was stolen from 43 Back Gate Road in Sheldon.

Man wanted on charges of harassment

The Beaufort County Sheriff’s Offices is searching for Jason John Owen. He is wanted for harassment in the first degree.

The Beaufort County Sheriff’s Office is searching for Justin Edward Seno. He is wanted in connection with a burglary that occurred on Bray’s Island in October 2016 during Hurricane Matthew.

The South Carolina Department of Consumer Affairs (SCDCA) is urging the public to be wary of imposter scams.

An email is circulating that appears to be from SCDCA and encourages recipients to click on a link for more information. This email is not from SCDCA.

The email apparently targets attorneys and references a consumer complaint filed against the business. It is a phishing e-mail and if the link or attachment provided is clicked, a scammer can install malware on the computer.

To avoid this type of scam, remember:

• Check the email address. Does the email address have typos or seem out of the ordinary? For example, since SCDCA is a government entity, all its email addresses end with the domain .gov. An email from “SCDCA” that ends in .com or .org is a scam red flag.

• Was the e-mail in a junk folder? E-mail providers use filters to help weed out spam and scams.

• Review the email carefully. Look for typos, grammatical errors and suspicious requests. Is the name of the agency spelled correctly? When in doubt, pick up the phone and contact the sender directly with a phone number not found in the email.

• Report. Always report phishing and imposter emails to the organization that the email is supposedly from. Also, consider reporting the email to the FBI’s Internet Crime Complaint Center, www.IC3.gov, and your e-mail provider.

To file a complaint or get information on consumer issues, visit www.consumer.sc.gov or call 800-922-1594.

A woman had her purse snatched at the St. Helena Branch Library on Jan. 19.

According to the Beaufort County Sheriff’s Office, a man reached in her vehicle through an open door, stole her purse and ran away.

Sheriff’s Office K-9 units conducted a search of the area, but were unsuccessful in locating the suspect. However, during the track of the suspect, some of the contents of the victim’s purse were recovered.

The suspect is a black man in his late teens, about 6 feet tall and slender. He was wearing a dark-colored, long-sleeve pullover jacket and gray running pants.

A man was sentenced recently for holding up a post office.

According to the 14th Circuit Solicitor’s Office, Cory Thomas Sargent, 23, of Barnwell, was sentenced to seven years for brandishing a weapon during a crime of violence.

On Jan. 20, 2016, Sargent walked into the lobby of the Allendale Post Office and asked for a price list for money orders. He then left the post office, but returned a few minutes later armed with a gun.

“This conviction is the result of a relatively new partnership between the 14th Circuit Solicitor’s Office and the Justice Department,” said Solicitor Duffie Stone. “Assistant Solicitor Carra Henderson works full time at the United States Attorney’s Office focusing on prosecuting career criminals who have committed crimes in its five-county area (including Beaufort County). The partnership is working very well due to the support we are receiving from federal, state and local law enforcement.”

On Jan. 17, 2010, Eleanor McLeod, 84, was found dead in her apartment in Sandalwood Terrace in Hilton Head.

She was wheelchair-bound and relied heavily on caregivers and friends to assist her daily.

A forensic autopsy revealed McLeod was strangled with a ligature, causing her death.

A person of interest was identified and interviewed regarding the murder, but no charges were brought as the suspicion fell short of probable cause necessary to make an arrest.

McLeod’s apartment was frequently unlocked and was unlocked on the date of her murder, creating the opportunity for anyone to walk in and out, not just the person of interest.

The Burton Fire District responded to three motor vehicle accidents on Jan. 17, resulting in two people being transported to the hospital and causing traffic delays.

The first wreck was reported on Trask Parkway just past 6 a.m. Burton firefighters arrived to find a vehicle off the roadway and in the marsh. The driver was uninjured.

The second accident was reported on Paris Island Gateway just before 8:30 a.m. by the Cross Creek apartment complex. Burton firefighters arrived to an accident between a pickup truck and a passenger vehicle. The female driver of the passenger vehicle was transported to Beaufort Memorial Hospital with what appeared to be non-life threatening injuries.

The third wreck occurred minutes later at the intersection of Robert Smalls Parkway and Goethe Hill Road involving a passenger vehicle and family van. The female driver of the passenger vehicle was transported to Beaufort Memorial Hospital with what appeared to be non-life threatening injuries.

The Burton Fire District has responded to over 20 motor vehicle accidents so far this year. Parris Island Gateway, Trask Parkway, and Robert Smalls Parkway were roadways in which Burton fire crews responded to multiple accidents last year, including fatalities and trapped occupants.