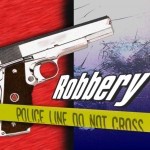 The Beaufort County Sheriff’s Office is investigating an armed robbery that occurred last night at a Beaufort convenience store.

At approximately 10:15 pm, Sheriff’s deputies responded to the Shell gas station (3530 Trask Pkwy) in
reference to a robbery occurring minutes earlier. Upon arrival, deputies met with two store employees and one
customer who advised that they had been robbed by two black males.

The victims stated that the two men, wearing dark clothing, gloves, and masks entered the store and ordered
everyone to the floor at gunpoint. The suspects demanded the victims empty their pockets. After taking an
undisclosed amount of cash as well as various tobacco products, both suspects fled the store in an unknown
direction.

No injuries were reported as a result of the incident. The Sheriff’s Office is asking anyone with information
contact either Investigator Sgt. J. Kelleher at 843-255-3418 or the Beaufort County Dispatch Center at 843-524-
2777.