ABLE Foundation, the Disabilities Foundation for Beaufort County, announced the release of its annual ornament. It is the fourth in a commemorative series featuring favorite Lowcountry scenes.  The 2013 ornament features a dolphin and can also be used as a medallion. It was created locally and was commissioned from Buf’s in Beaufort. The annual ornaments have been a traditional fundraiser for the ABLE Foundation, a nonprofit group that supports services and programs assisting individuals with special needs. 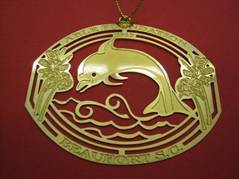 ABLE’s efforts in the recent past and this year have been to fund Camp Treasure Chest, a summer camp for children with special needs. Children with needs such as developmental delays, cerebral palsy, Down syndrome, genetic disorders and autism may require additional and special services and trained staff and accommodations, not usually available at regular summer camps. In the absence of the Camp Treasure Chest, these special needs children would likely not have a summer camp experience.  Funds from the state for summer services have been virtually eliminated and the camp is almost solely supported through fund raising and grants. All proceeds from the sale of ornaments go to support Camp Treasure Chest.

Ornaments are available at these locations in the greater Beaufort area:

A limited number of prior years’ ornaments are available from the Office of Disabilities and Special Needs.  Contact ABLE at 843-255-6300.