The city of Beaufort and 20 area church groups worked together in partnership for a day of remembrance commemorating 9/11 at the Henry C. Chambers Waterfront Park in Beaufort last Sunday. Beaufort County’s own local first responders were honored and applauded by the large, very appreciative audience in attendance. Between speeches by local dignitaries and music by local groups, “Taps” was played four times as audience members stood to honor those who died during each of the four attacks. 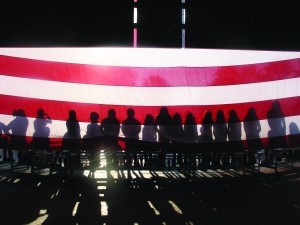 Beaufort resident and 9/11 widow Teri Maude gave a very moving speech. Her husband, Lt. General Timothy J. Maude, the Army’s deputy chief of staff for personnel, was killed when American Airlines Flight 77 crashed into his Pentagon office. Her husband, along with everyone else who died, was a hero, she said, adding, “Today is Patriot’s Day. Today is about every single individual who gave their life on Sept. 11. Today we come together to remember and fulfill that promise we made to one another to never forget.”
Awards were given to Fireman of the Year Ross Vezin and Law Enforcement Officer of the Year Investigator George Erdel.
The 9/11 event was conceived of and spearheaded by Councilwoman Donnie Beer more than a year ago.  The Riverview Charter School, The Naval Hospital Choir and Michelle Hunter and Karen Deer provided the music.  City of Beaufort Police First Sargeant  Chris Cushman and Lt. Alfredo Givens with the Beaufort County Sheriff’s Department performed “Taps.”
Mike Green, pastor of the Link Church, chaired the beautiful 10:30 program which involved 20 different Houses of Worship. Many thanks to all these individuals and groups who volunteered and worked many long hours to create such an outstanding and moving event for Beaufort to honor the heros of 9/11. 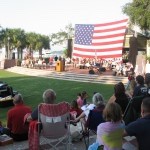 A day to remember deserves more than a day