Beaufort welcomes Gary Sinise, the Lt. Dan Band, and all the wounded veterans and their families

On Friday, September 16, at 8:30 p.m. in the Henry C. Chamber Waterfront Park, the Lt. Dan Band and actor Gary Sinise will take center stage in front of wounded veterans and their families who are attending the second annual Lt. Dan Weekend. Gary and the band have traveled worldwide to entertain those serving in the military. The band is named for “Lt. Dan”, the character Gary portrayed in the 1994 film “Forrest Gump,” a role for which he earned an Oscar nomination for Best Supporting Actor. 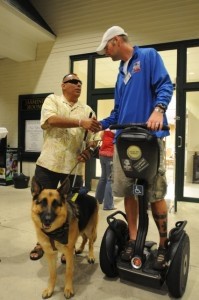 As Gary began visiting troops around the world, people (even little kids) who didn’t know him as Gary Sinise the actor, would recognize him as “Lt. Dan”. Those in the military also identify strongly with the character. And so, the name for his group became an easy choice: Lt. Dan Band! The band plays everything from Stevie Wonder and Jimi Hendrix classics to contemporary songs by Kelly Clarkson, Evanescence, Beyonce, Lonestar, the Zac Brown Band and much more.
Each show highlights the musical diversity of the band, as well as the passion and energy each member brings to the stage. Whether performing for troops overseas or a local crowd, their goal is to have fun and rock the house!
Learn more about the band’s history and its talented musicians by visiting www.ltdanband.com. 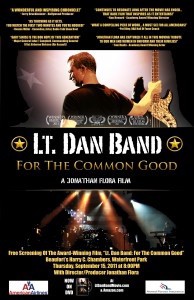 On Thursday, September 15, at 8 p.m. at the Henry C. Chambers Waterfront Park, Jonathan Flora — producer, director, and recipient of the inaugural Santini Patriot Spirit Award — will host a free screening of his award-winning documentary, “Lt. Dan Band: For the Common Good.”
American Airlines and Armed Forces Insurance are sponsoring this event on behalf of our severely wounded veterans, their families, and caregivers who are attending the second annual Lt. Dan Weekend. Also teaming up for the troops are the Beaufort Film Society, Jack Carter’s Lemonade Stand, and the Independence Fund. The Waterfront Park will be open to the public and sponsors encourage residents and visitors to enjoy the free screening and to buy a glass of Jack’s lemonade to benefit the troops. Before the movie, the Groove Tones will entertain those gathering at the waterfront park.

What other events are happnening this weekend?

September 14 to 18 marks the second annual Lt. Dan Weekend, a four-day event that honors severely wounded veterans from the wars in Iraq and Afghanistan. From Beaufort to Ridgeland, Hilton Head to Fripp Island, Bluffton, Lady’s Island, and Parris Island, neighbors and merchants have banded together earning money for this worthy cause. In March 2011, the Independence Fund, sponsor of the Lt. Dan Weekend, needed $75,000 to make the 2nd annual Lt. Dan Weekend possible. As of September 1, more than $180,000 has been collected in cash and other in-kind donations thanks to the tireless efforts of volunteers, the generosity of residents and merchants, and corporate donors. Fundraising aside, the Lt. Dan Weekend is a much needed retreat for wounded veterans and their loved ones.
On Wednesday, Sept. 14, the veterans, their families and caregivers arrived at Palm Key in Ridgeland, where they were welcomed with open arms by owners and volunteers who will make their stay a memorable one. That evening, local favorite Shannon Tanner performed a concert. During the next four days, they will enjoy true Southern hospitality including lodging, meals, live entertainment, and a variety of recuperative programs.
Today, Thursday, September 15, the veterans will travel to Beaufort for the Conflict Zone Photographic Exhibition. The Conflict Zone is a groundbreaking look at war through the lenses of the world’s leading combat photographers with proceeds to help injured troops and journalists.
After the exhibit at City Hall, veterans will travel to Waterfront Park for the screening of “Lt. Dan Band: For the Common Good”, hosted by the producer and director, Jonathan Flora. The 8 p.m. airing of this film is free and open to the general public.
On Friday, Sept. 16, a concert that will rock the Lowcountry takes place at 8:30 p.m. at the Henry C. Chambers Waterfront Park. A movie comes to life when Gary Sinise and the Lt. Dan Band take the stage in front of 150 wounded veterans and their loved ones. The concert is open to the general public for a modest ticket fee, and all proceeds benefit our wounded veterans. Gates will open at 5 p.m. Ticket holders are encouraged to bring folding chairs or blankets for seating, but no coolers, strollers, or pets.
Earlier that day, the 2nd Annual Lieutenant Dan Golf Classic will take place on the Parris Island “Legends” course.
On Saturday, Sept. 17, a Lt. Dan 5K Run will kick off at 8:45 a.m. Also on Saturday, a Lt. Dan Bike Ride will take place at the Marine Corps Air Station from 10 a.m. to 1 p.m. on the self-contained 11-mile loop within MCAS.
Also on Saturday, Sept. 17, locals, wounded veterans and families and Beaufort visitors will line the streets in the historic district for Beaufort’s 300th anniversary parade. Actor Gary Sinise will serve as grand marshal and will share his ride through downtown Beaufort with two Medal of Honor recipients, Jay Vargas and Drew Dix.

9/11 Commemoration in the park solemn, reflectful

Kooky Mooky’s: Great food to eat in the park

Beaufort Firefighter Darby Jardeleza, lets Ike talk with another firefighter on the radio while his little