This past Sunday, Penn Center was delighted to welcome back U.S. Congressman and Penn Center 1862 Circle Member, James E. Clyburn, author of Blessed Experiences: Genuinely Southern, Proudly Black for a talk about his book with attendees and to sign copies afterwards.

Blessed Experiences: Genuinely Southern, Proudly Black, is his personal memoir — following his beginnings during the Jim Crow era of the South to today’s equal challenging world inside the Washington Parkway.

From his humble beginnings in Sumter, South Carolina, to his prominence on the Washington, DC political scene as the third highest-ranking Democrat in the House of Representatives, U.S. Congressman Jim Clyburn has led an extraordinary life. In Blessed Experiences, Clyburn tells in his own inspirational words how an African American boy from the Jim Crow–era South was able to beat the odds to achieving great success and become, as President Barack Obama describes him, “one of a handful of people who, when he speaks, the entire Congress listens.”

Born in 1940 to a civic-minded beautician and a fundamentalist minister, Clyburn began his ascent to leadership at the age of twelve, when he was elected president of his National Association for the Advancement of Colored People (NAACP) youth chapter. Clyburn was elected to Congress in 1992. Serving as co-president of his freshman class, he rose quickly through the ranks and was elected chair of the Congressional Black Caucus in 1999 and House Democratic Caucus vice chair in 2002. Three years later he was unanimously elected chair of the Democratic Caucus. 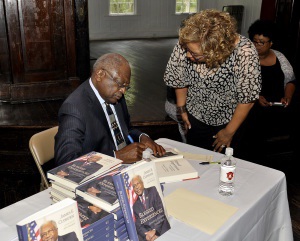 When Democrats regained the House majority in 2006, Clyburn was elected House Majority Whip. Now as Assistant Democratic Leader, Clyburn, a self-described independent, prides himself on working to overcome barriers and destroy myths without becoming too predictable. “I have worked across party lines to further legislative causes, and on occasion publicly differed with some of my allies in the civil rights community,” says Clyburn. “My experiences have not always been pleasant, but I have considered all of them blessings.”

Of his success Clyburn says he was “blessed with nurturing parents, a supportive family, and loyal friends.” “But,” he added, “my life was not just about knocking down doors and lowering barriers. I spent some time marching in the streets and occupying the inside of South Carolina jails.” As a civil rights leader at South Carolina State College, as human affairs commissioner under John C. West and three subsequent governors, and as South Carolina’s first African American congressman since 1897, Clyburn has established a long and impressive record of public leadership and advocacy for human rights, education, historic preservation, and economic development.

Currently, Jim Clyburn is the leadership liaison to the Appropriations Committee, one of the Democratic Caucus’ primary liaisons to the White House and Chair of the recently formed House  Democratic Outreach & Engagement Task Force.

Warren Buffet stated, “Jim Clyburn’s book Blessed Experiences has captured not just the history of this tireless leader’s more-than-four decades in public service, but also a sense of the times. While Jim has broken many barriers as the most significant African American member of Congress, his true success comes from his approach to collaboration on the national issues, as well as his ability to understand the needs of the constituency that he represents.”

Everyone agrees Blessed Experiences: Genuinely Southern, Proudly Black is a must read for anyone who wants to know what life was really like for this southern gentleman, both then and now. As attendee David Grim remarks, “The sampling of stories he shared demonstrated why Jim Clyburn has been such an effective advocate for our fellow citizens in need and for our democracy.”