A quintessential American story, The Life and Times of Congressman Robert Smalls, 1839 – 1915, will be on exhibit at the Verdier House, beginning Tuesday, October 4. The traveling exhibit from the South Carolina State Museum is sponsored by Historic Beaufort Foundation and has appeared in museums along the East Coast since it debuted in 2008 at the Avery Research Center for African American History and Culture in Charleston. 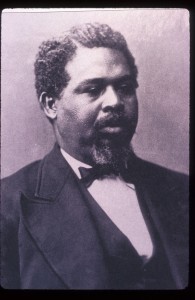 The story of Smalls, born a slave in Beaufort, represents the experience of the first generation of African Americans who emerged from enslavement to live full and productive lives. His life also exemplifies how African Americans helped to shape the country’s history for the short, but very important, period after the Civil War called Reconstruction.
Smalls’ heroic exploits on behalf of Union forces in 1862 provided his entrée into the U.S. military and politics. By the time he died in 1915, Smalls had served five terms in the United States Congress and was the dominant political leader in Beaufort County for 45 years.  Smalls ended his career as Collector of Customs on Bay Street in Beaufort. In 2009, he was named to the S.C. Hall of Fame.
The exhibit, curated by Smalls’ direct descendant Helen B. Moore, contains the family’s collections of artifacts, documents and other memorabilia related to his life, including:
• Furniture and other artifacts from the McKee-Smalls House at 511 Prince Street where Smalls and his mother were enslaved (HBF will include Robert Smalls’ Custom House desk which the foundation owns.)
• Scaled replicas of the CSS Planter and the USS Keokuk, two ships piloted by Smalls during the Civil War;
• Letters written by Smalls to dignitaries of the time;
• 35 framed and matted photographs of Smalls and his descendants, as well as copies of legislative acts he introduced and other period documents;
• 12 exhibit panels with text and graphics.
The exhibit will occupy three rooms of the Verdier House, Mondays – Saturdays, 10 a.m. to 4 p.m. until December 20. Admission is free to HBF members and groups of schoolchildren; $10 per person for non-members and includes a tour of the house. Call 379-6335 for more information.

‘Blues and Brews’ slated for First Friday event at Habersham

Beaufort Then & Now: Memories of Tabernacle Baptist and life downtown