Morgan Olivia Porter celebrated her 3rd birthday August 24. What made this a different sort of birthday is that Morgan is in Children’s Hospital at MUSC in Charleston awaiting a donor heart. She contracted a virus that attacked her own heart and is now surviving on a temporary pumping device. Morgan is the daughter of Maj. Robby and Sarah Porter of 58 National Blvd. on Lady’s Island. 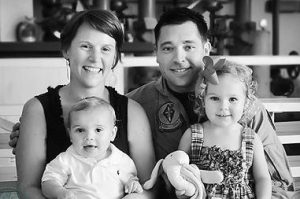 Robby and Sarah have rented a place to stay in Charleston and have many added expenses. A spaghetti dinner will be held Monday, Sept. 12 from 6-9 p.m. at the Cat Island Grill and Pub. The cost will be $10 per person. Proceeds will go to the Porter’s to help defray expenses. Please call 524-4653 for more information.
Maj. Porter had just returned from his fourth deployment out of the Marine Corp. Air Station two weeks before Morgan’s becoming ill. Morgan was a very active kid who they took to the pediatrician with what was thought to be stomach virus. Thank goodness their pediatrician, Dr. Coleman at Beaufort Pediatrics, picked up the subtle signs that something might be wrong and sent them up to MUSC. Her condition quickly degraded, and she was immediately admitted to the Pediatric ICU averting cardiac arrest. She was diagnosed with severe cardiomyopathy. A virus she got months ago literally attacked her heart, even though she appeared to be fine. Her body and heart just compensated until it couldn’t anymore. Medicine did not work, and she was placed on an ECMO machine (heart and lung bypass) for a week to give her heart a chance to recover on it’s own. That did not work, and the only option now is a heart transplant. Since ECMO is not long-term, she had surgery for a Berlin Heart-which performs all her heart function until a donor becomes available.
Maj. Porter is with squadron VMFA-251 at the USMC Air Station in Beaufort.

Habersham to host ‘Rock the Block’ back to school rally