Beaufort County recently hosted a ribbon-cutting ceremony for the Bluffton Parkway 5A Flyover, a mile-long elevated roadway designed to link Bluffton Parkway at Buckingham Plantation Drive to U.S. 278 and the bridges to Hilton Head Island.

The flyover opening marks years of public engagement, planning, coordination, dedication and collaboration, as well as design and construction.

The $46 million project began in May 2013. Project funding came from a 1-percent sales tax approved by county voters in 2006 and a Federal Highway Administration grant of $15 million via the South Carolina Department of Transportation.

More than 53,000 vehicles travel on that stretch of U.S. 278 daily. Based on estimates by the SCDOT, traffic is expected to decrease on U.S. 278 by 25 percent with about 13,000 vehicles being diverted to the flyover.

“The flyover will add to public safety by giving motorists an alternate evacuation route that will serve our county well for years to come,” he said. “It is a perfect example of what transportation is all about. It supports jobs and businesses. It links jurisdictions. It joins communities and families.”

Vaux added that the flyover also gives motorists spectacular views of the marsh between The Gatherings and Buckingham Landing, while demonstrating a defining community success for Beaufort County, the region and South Carolina.

The new signal began operating on July 15 after the flyover opened to traffic.

Motorists are asked to use caution when approaching this intersection.

For more information, contact the Beaufort County Traffic and Transportation Engineering Department at 843-255-2940. 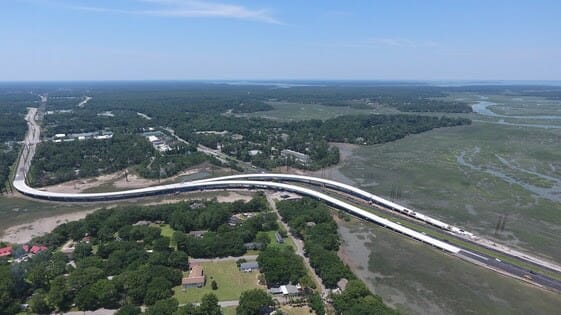 Dog day is time to celebrate our furry friends

Latest from The Bluffton News

Edmond Russell Baxley, III, has been named the new president and chief executive officer of Beaufort

ByAileen Goldstein Local residents and visitors will soon have many more options for their shopping pleasure.

By Aileen Goldstein Lt. Joe Babkiewicz is many things. He is a law enforcement officer, a

After a little boy was killed by an alligator at Disney World, the animal also had