The Thomas Heyward, Jr. Chapter of the Daughters of the American Revolution took the opportunity to combine the 300th Anniversary of the founding of the City of Beaufort and the start of Constitution Week to honor the chapter’s namesake with a wreath laying at the statue of Thomas Heyward, Jr. at Waterfront Park on September 15. Regent Nancy Crowther (pictured, at right) and Anne Heyward 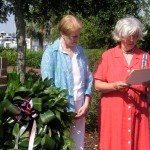 (pictured, at left), chapter Historian and a direct descendent of Mr. Heyward, read a celebratory Proclamation from Beaufort’s Mayor. Most well known as a signer of the Declaration of Independence, Heyward also signed the Articles of Confederation, served as a judge and commanded a militia against the British in the Revolutionary War until taken prisoner by the British. “He was one who risked life, liberty and property in pursuit of the creation of the United States of America, and we are proud to honor him this day”, said Mrs. Crowther at the ceremony.

At the September meeting of the Thomas Heyward, Jr. Chapter of the Daughters of the American Revolution Chapter Chaplain Anne Kennedy swore in two new officers for the upcoming year. Charlene Shufelt is the newly elected Vice Regent and Eliza Oliwa is the Recording Secretary. The ceremony took place at the Community Center at the Islands of Beaufort and was followed by a tea honoring the new officers. DAR is an organization that celebrates the founding of the United States of America and recognizes the contributions of those who fought in or provided substantial support for those who fought the British for our freedom. For more information about the chapter, please contact Regent Nancy Crowther at 524-0134.

Also at a recent meeting of the Thomas Heyward, Jr. Chapter of the Daughters of the American Revolution, Julie Good, the new Executive Director of Historic Beaufort Foundation, spoke to the group about the foundation, its mission and the many projects and events scheduled for the upcoming year. Many of the members of DAR are also members of HBF and recognize the value of the foundation to the city of Beaufort. After her talk, Charlene Shufelt, Chapter Vice Regent, presented a check to Ms. Good as a donation from the DAR to the foundation, and the meeting adjourned to allow the members to get a chance to get to visit with the new executive director over tea and refreshments.

Beaufort Then & Now: Memories of summers at the Sea Island Hotel