Local concertgoers are in for a rare treat on October 13 and 16 when The Beaufort Symphony opens its 2011-2012 season with “A Twentieth Century Celebration.” Guest soloist Alexander Pershounin will offer the Koussevitsky Bass Concerto, accompanied by the orchestra.  Dr. Alexander Pershounin is Associate Professor of Bass at Columbus State University in Georgia, where he is also director of jazz studies. He has performed throughout Europe and the United States and has appeared with world class artists ranging from Itzhak Perlman and Yo Yo Ma to Ray Charles and Benny Golson. 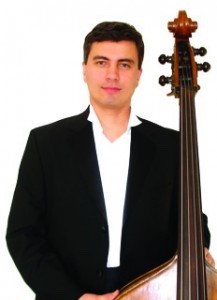 The bass is the largest member of the string family. It is shaped like a giant violin, and the instrument’s strings can be bowed or plucked while the player stands or sits on a high stool.  The bass, usually found near the back of the orchestra, takes center stage for this concerto, which was written by the young Serge Koussevitzsky, legendary Russian conductor of the Boston Symphony.
Maestro Frederick Devyatkin has chosen Symphony #2 by the great Finnish composer Jean Sibelius to round out “A Twentieth Century Celebration.”  Sibelius (1865-1957) was known as an intensely nationalistic composer. He began plans for the Second symphony while visiting in Italy.  It was first performed in Helsinki in 1902 with the composer conducting, and was instantly embraced by the Finns, who had a fierce longing for freedom from Tsarist Russia. He was particularly interested in the natural landscape of Finland, and his music evidenced strong ties to his beloved homeland.
The Second Symphony established Sibelius as a major composer in the world of music.  One hundred years later his compositions are often performed and his Second Symphony is considered the most popular of his seven symphonies. Among his other well- known works are the tone poems for orchestra, ‘Finlandia’ and ‘The Swan of Tuonela’.  Although extremely prolific in his early years, he composed very little during the last thirty years of his life.
Maestro Devyatkin and the musicians of the Beaufort Symphony invite you to become a subscribing member of our audience this season.  By doing so you ensure that your seat will be waiting for you, and together we will continue to “Keep the Music Live.”
Musicians interested in performing with the Beaufort Symphony Orchestra are invited to contact Maestro Devyatkin at 912-232-7250 or Olive Warrenfeltz at 843-575-3813.
Come see the symphony at USCB Performing Arts Center, 801 Carteret Street, Beaufort. Tickets are: Adults, $35, youth through high school, $5. Get season subscriptions by calling  843-524-3593 or 843-838-9309.  Individual tickets at the Beaufort Orchestra’s website www.beaufortorchestra.org or call Ticket Fusion (toll free) 1-877-548-3237. Remaining tickets will be sold at the door, if available.

And a merry olde time was had by all