By Gene Brancho
Friends, relatives, and admirers of Smokin’ Joe Frazier attended two local  ceremonies on Wednesday, Nov. 16, to celebrate the life and legacy of the former Olympic Gold Medalist, Heavyweight Boxing Champion and Beaufort native.
Born in Beaufort in 1944, Frazier died at the age of 67 on November 7, after succumbing to liver cancer in Philadelphia. Hundreds turned out at Beaufort’s Henry C. Chambers Waterfront Park as Frazier’s daughter, Jacqui Frazier Lyde, herself a former boxer and one of his 11 children, eulogized her father as being a wonderful father and provider. 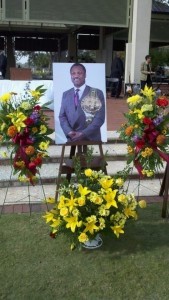 Lyde, now a Municipal Court Judge in Philadelphia, thanked her family and George Foreman for their support.  “My father could not be brought to Beaufort, but his spirit is here,” she said.
Local officials and personal friends of Frazier’s spoke at the ceremony also. Beaufort Mayor Billy Keyserling spoke of what Frazier meant to Beaufort, and  also of his “when you go down, you get back up” attitude.  Mayor Keyserling concluded that “Joe and I lived in separate worlds in Beaufort, but shared a lot too.”
State Senator Tom Davis recounted Frazier’s receiving the Order of the Palmetto last year, and longtime Frazier friend and boxing trainer Charles Singleton talked of their friendship and said “training at Joe’s gym was the  highlight of my whole life.”
With bagpipe music to start the ceremony, and a group of current amateur boxers including several children concluding the ceremony by ringing a boxing bell 15 times — signifying 15 rounds in a boxing match — Beaufort said goodbye to a hometown hero.

This is the final article in a series of four on VA Mental Health Services. The