Annual Golf Tournament will surpass $800,000 in contributions to local charities

I began an internship on Fripp Island for the summer semester of my senior year at Clemson. The weekend before I started, friends wanted to introduce me to the “local crowd” here in Beaufort. So I joined them at the Beaufort Charities Invitational Golf Tournament which was held that weekend at Ocean Point. That single event became the genesis of my love for all that is Beaufort. I made lifelong friends, moved here after graduation, worked here and am raising two girls in this wonderful city! And it all began with a golf tournament.

In looking back, I found that The Beaufort Charities Invitational was my first introduction to the genuine camaraderie of this community. It defines the spirited nature of this philanthropic small town and unofficially kicks off the summer season in Beaufort and the surrounding Sea Islands. But more importantly, it delivers on its’ promise to help local non-profits which in turn helps all of our residents.
And, it’s also the oldest charitable golf tournament in the state of South Carolina. And it’s turning 40 this year. And it’s going to celebrate its’ birthday with a whole weekend of fun filled opportunities beginning on May 14th. And, it’ll be held on Fripp Island, where it all began for me.

You don’t want to miss the Friday night bash featuring the East Coast Party Band which will be held at the Fripp Island Beach Club Tennis Courts. Tickets for this amazing event are still available and are $30 per person and $50 per couple. For tickets please visit www.beaufortcharities.org to reserve your spot on the dance floor.

The Committee Chairman, Christian Sherbert told me that “it’s nice to have a great party, but what we are really doing is raising money, much needed money, for many of our local charities. Eighteen groups that are dedicated to helping those less fortunate have received donations from us over the last 40 years. No money goes to our operating costs or to fund a party. It all goes to local charities and we couldn’t be more thrilled to write the checks.” 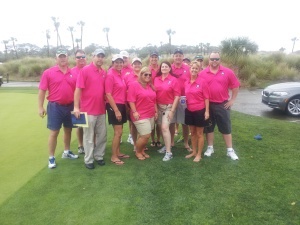 For those of you who don’t know the history of the event, it was first held in 1976 and was originally called “The Heart Fund.” In 1980, Tournament Chairmen Buster Davis and Woody Oakley made the decision to move the event to Fripp Island Resort where it has been held ever since.

In 1989, Tournament Chairmen Paul Barber and Walter Daniels worked to change the name to “The Beaufort Charities.” Barber and Daniels had managed the event collectively for nineteen years and had the foresight and vision to see that the tournament needed to be directly involved with local need organizations in Northern Beaufort County.

Following in December 1991, Barber and Daniels joined forces with the United Way of Beaufort. A new board of directors was elected and they formulated the following mission statement which still guides the organization today: The Beaufort Charities is a philanthropic organization focused on generating funds to be specifically used for local need organizations which possess a worthy objective and program of service for human needs in Northern Beaufort County.

In 1995, Barber, Daniels and its’ Board of Directors continued to evolve the event and changed its name to “The Beaufort Charities Invitational, Inc.” an incorporated 501 (c) (3) non-profit organization moving away from umbrella of the United Way.

A special thank you to the 2015 sponsors

This is the final article in a series of four on VA Mental Health Services. The