By Lanier Laney
Beaufort’s grand “Old Guard” along with younger generations and friends turned out on the first cool day of fall this past weekend for Marjorie Trask’s porch and garden party to watch the 300 Birthday Parade go by on Bay Street. 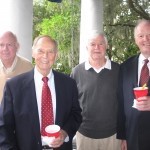 Beaufortonians seem to go into some sort of hibernation during the hottest, most humid months of summer, and people greeted each other with gusto after not seeing one another for so long. Thoughts of Beaufort’s history were in the air as the charming parade passed by with costumed float riders. An older gentleman next to me remarked, “You know, if we had never separated from England, Marjorie Trask would be a Duchess!” he said with a smile. Marjorie’s father was Angus Fordham who was Mayor of Beaufort for 17 years and Marjorie’s family, the McLeods, celebrated 100 years in the house with a family picnic this past April. The beautiful, many-columned home, built in 1813 is featured on the cover of “Beaufort’s Historic Homes” coffee table book and was the headquarters of General Stevens during the Civil War. 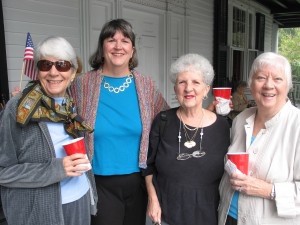 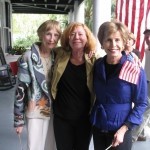 The wonderful Marjorie Trask, (or “Big Marge’” as she is affectionately known — her daughter being Marjorie Trask also, now married to Herb Gray). Big Marge’s lovely party in honor of Beaufort’s 300th kicked off the Beaufort Fall social season in fine style. 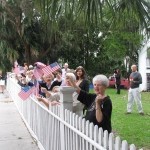 A ‘job well done’ goes to Erin Dean and Councilman Mike Mcfee who spearheaded the successful 300 Parade. Pat Harvey Palmer and the Lions Club along with the city staff, did the brunt of work. Special thanks to them and all the organizations that worked so hard to pull off such a wonderful parade. “Blessedly free of blatant advertising like usual” said an onlooker to me. Turns out that that was intentional as floats were required to have a theme (with costumes) and not just be a rolling billboard for a business.
It turned out to be a great birthday celebration for Beaufort with a movie star grand marshal in Gary Sinise! Too bad we have to wait another 300 years for the next one. 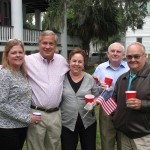