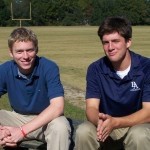 Congratulations to Jack Griffith and Billy Dailey, seniors at Beaufort Academy, who were named First Team All-Region for the 7-team, SCISA Region II, 8-man football! Jack and Billy will be playing in the North-South All-Star Game on December 3, at Patrick Henry Academy. Jack Griffith was also named Region Defensive Player of the Year. Outstanding performance and kudos to Coach Alford who was second in the voting for Region Coach of the Year.

To bait or not to bait: The great debate

By Mike McCombs Along with the ideal temperatures and calm waters, Hilton Head Island High School

By Justin Jarrett, LowcoSports.com One of the most successful high school boys basketball programs in the

By Wes Kerr LowcoSports.com  Beaufort High led a strong showing from the Lowco contingent at the SCHSL