Yes, I know it’s June, temperatures are in the 90s, warm sunrays, cool breaking waves and the last thing on your mind is your retirement.

Have you ever noticed how the only time you see ads on the TV are either in December or January when financial institutions are after you to put your money into an IRA or other type retirement plan?

We have to admit we all tend to put off to tomorrow what we should do today, and unfortunately our retirement is no exception.

However, before you know it the years will have passed and if you are like most people,  you are not going to like the results.

According to the U.S. Census Department, which looked at wealth by age group, there is a benchmark that Americans can use to judge for themselves where they stand. 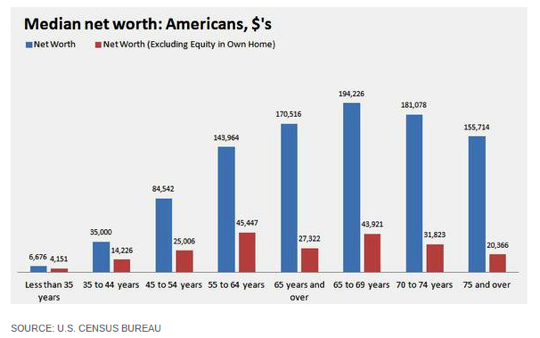 Looking at the chart, simply find your age and see the net worth and then see how you stack up.

The general approach is to take your net worth and figure out the amount you can withdraw over your estimated life expectancy and see if you can really live on that amount each year with no income, except maybe Social Security. And naturally, Social Security is at best a maybe these days.

For example, let us assume a net worth of $100,000, and using the general rule of thumb of taking 4 percent each year and assuming you do get Social Security, it works out in the neighborhood of about $20,000 per year.

Considering the cost of living in today’s dollars, plus the fact that the average American lives to be 78, most of us would find that number hard to live on.

Obviously you can improve your numbers if you invest.

It is estimated that more than half of American households own a mutual fund, an $11.6 trillion dollar industry.

But are American’s putting all their eggs into one basket along with all their hopes and dreams?

Let’s do some math and use 4.5 percent to align with the compound factor table rather than 4.4 percent.

We see that in real dollars you only have a net gain of $209 above inflation.

Now it is much easier to see how inflation erodes the 4.4 percent initial figure. That $209 is really a 1.5 percent return, not 4.5 percent after 10 years.

And we did not take into consideration the expense ratio of the EFT fund, which would lower it.

Just to be clear, putting your money into an ETF or index fund is much better than stuffing your mattress. But, you need to understand that relaying solely on them is really missing out on the opportunity to build real wealth.

As you can plainly see from the example above, to build wealth you need another tool in your investment toolbox.

That is why individuals, as well as large mutual fund companies like Vanguard Inc. invest in individual stocks.

Vanguard has invested in 1,800 companies where it owns a minimum of 5 percent of the company’s individual shares of stock. Naturally, they have invested in others owning a percent higher than 5 percent.

Investing in individual stocks is their hedge against inflation.

How many millionaires do you know that have become wealthy by investing in mutual funds?

The fact of the matter is to build wealth your returns need to be higher to fight against the erosion of inflation. If you want to live on more than say $20,000 a year in retirement, or make more than 1.5 percent, in our opinion you should consider putting a portion into individual stocks to have a hedge against inflation.

To learn more about value investing research, contact me today for a complimentary meeting.

This column is not to be intended as investment advice. It is solely for general information, and you are advised to perform your own research and due diligence prior to making any type of investment and that investing in stocks involves risks that could result in part or all of your capital invested.

Women in Philanthropy awards $56,000 in grants