Speaking at a quick pace to a spirited crowd of residents, church members and area religious leaders, Williamson managed to jam a wide range of topics – from children’s health and well-being to the economy and race relations – into the nearly 25-minute-long talk.

For many like Marcia Whitman of Beaufort, it was an opportunity to purchase Williamson’s latest book, “A Politics of Love: A Handbook for a New American Revolution,” and see the author speak again in person.

“She’s just awesome,” said Whitman who had heard the candidate speak once before. “She’s positive and she comes from a loving place.”

Whitman, who is “in her 60s,” said she was still undecided as to who she would vote for come November of 2020 – she also likes Elizabeth Warren. Whatever the case, though, Whitman said she was tired of politics and looking for a change.

“The main thing for me is somebody who can beat Trump,” she said.

Though at times the 67-year-old Williamson has raised eyebrows or been mocked for her seemingly soft touch approach to politics, and despite polling among the bottom of the pack in an already crowded field of candidates vying for the Democratic party’s nomination, she has stuck with her message.

On more serious notes of criticism, she has drawn fire from mental health professionals and others for remarks made about the widespread use of antidepressants, which she said were over-prescribed, and most recently, for calling vaccination mandates “draconian” and “Orwellian.”

On the use of antidepressants, she later told the New York Times she regretted using Twitter to discuss the topic, and in June, apologized for comments made about vaccinations saying that she misspoke and understood that “many vaccines are important and save lives.” 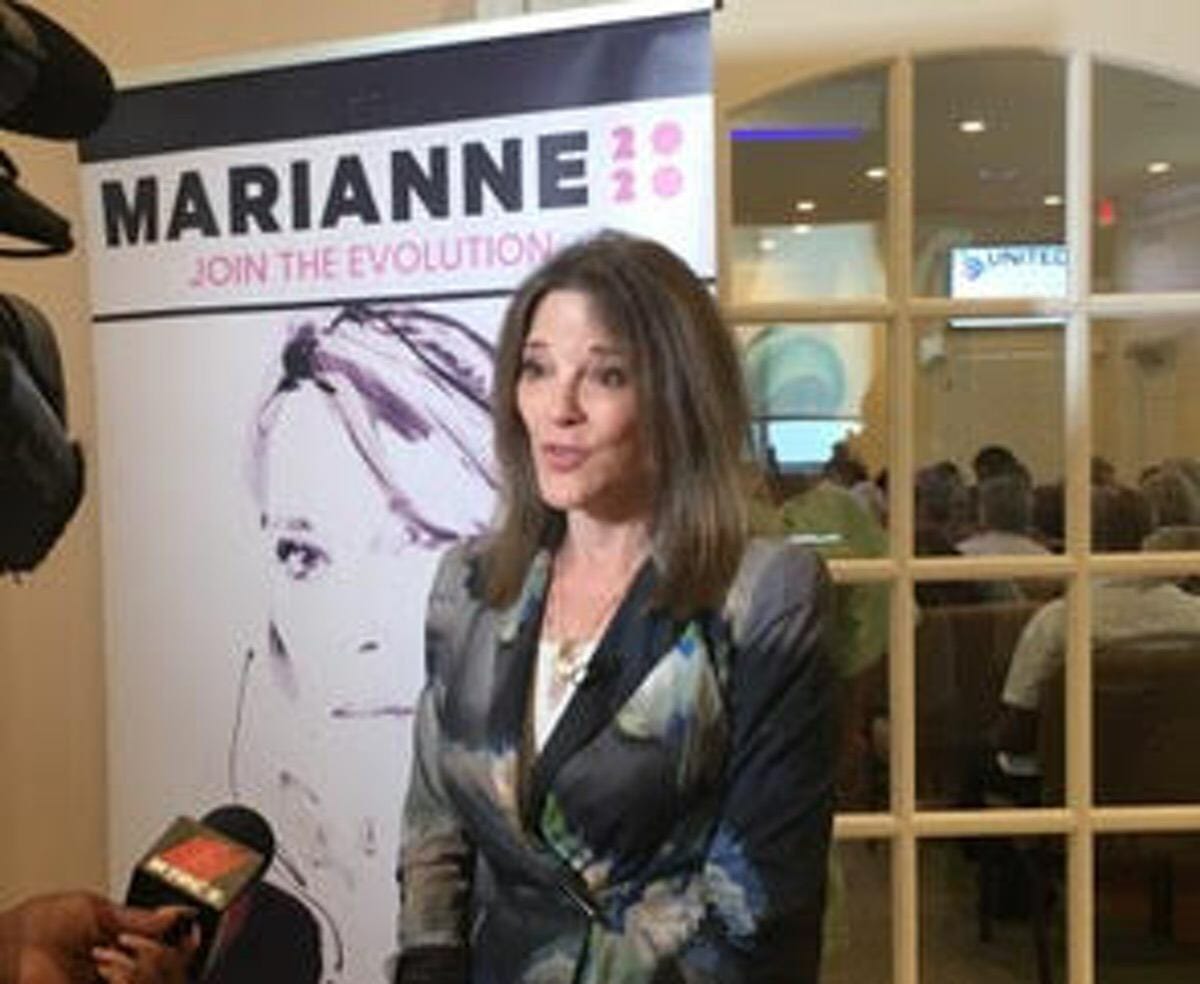 Still, many voters have embraced her style.

At the Beaufort event, her opening remarks of love in the face of hatred were met with loud applause and shouts of “Amen.”

On the idea that communities have to ask for grants or additional funding for public school education or the needs of the impoverished, Williamson said, “This is America. We all get to feast here.”

She went on to criticize “subsidies to fossil fuel companies” and the Trump tax cuts.

“While we are passing a $2 trillion tax cut where 83 cents of every dollar is going for the very, very richest of individuals and corporations, while we are living at a time when so much money, so much wealth is transferred, I don’t know, where I grew up, we call that theft,” she said.

Williamson also answered questions about the environment, climate change, healthcare and the border crisis which she called government-sanctioned child abuse and a drama created by the president to dissuade people from applying for political asylum or sow seeds of division.

“Do we need better processes at the border? Of course we do,” she said. “We need more judges, we need more technology, we need more agents, we need more of everything that we know that we need, but what is happening there is literally a trumped up drama.”

After the event, Tanya Colucci, 41, of Bluffton, said she was impressed with what she heard. Williamson’s views on educational opportunities and the need for additional education on civics and U.S. history in schools, particularly resonated with her.

“I definitely feel her energy and passion,” she said. “I was very impressed with her getting down to the truth, and how she let people know what the problems and causes behind the issues are.”

Glenda Roberts, who attended the town hall with Colucci, said for her, children’s health and the environment were key to selecting a candidate.

“She’s going to try with love,” she said about Williamson’s message in particular. “It’s the total opposite of how it is now.”