While Beaufort developer has his say, residents’ reactions remain mixed

Beaufort developer Dick Stewart says his downtown development projects are not about changing the historic fabric or nature of Beaufort but enhancing what’s there.

“What this is about is enhancing that – taking vacant buildings or vacant places such as surface parking lots and converting them into vibrant parts of this community,” he said, recently at a public information session held by his company online on Wednesday, March 24.

Stewart’s plans for Beaufort’s downtown commercial district have come under fire recently by proponents of historic preservation and residents who say they have been caught off guard by the recent bulldozing of buildings – buildings they say are, in fact, historic and should have been preserved.

In the more than one-hour, public-relations styled presentation, Stewart and his staff took turns outlining and discussing plans for five major projects, on or around Port Republic Street, now in various stages of approval and construction. 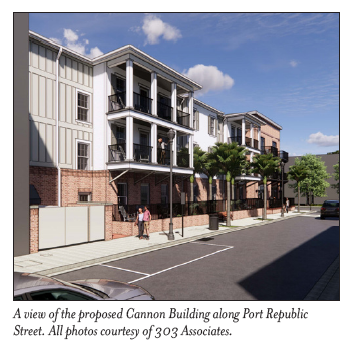 At times during the meeting, Stewart seemed to want to set the record straight.

“We find ourselves at a point now where we are happy to have this meeting and give you the facts and give you information and to correct unfortunately some misinformation that has served unique purposes driven perhaps by motivations that are not completely altruistic on the part of a limited number of people,” he said.

At other times, he was defiant.

“We are not going to be cowed or intimidated by that stuff. This is a project or series of projects that we are proud of,” he went on to say.

Still, there are those who continue to take issue with the developments saying they’re concerned the projects would transform Port Republic street, a short narrow street in the heart of the city’s downtown commercial district into “a canyon of three-story buildings,” as longtime Beaufort resident and former Historic Beaufort Foundation Executive Director Maxine Lutz wrote in a recent op-ed.

“I predict the totality of these projects will pose the greatest impact on traffic congestion on neighboring businesses and residences, on infrastructure and on the National Historic Landmark District at any time in history, including the Great Fire of 1907,” she said.

Lutz took issue with the lack of a master plan for the commercial district and the “piece meal” way in which the projects have been proposed and approved over time.

In addition, she and other residents are concerned over the recent tearing down of smaller structures in the area such as the Bampfield Building, at 307 West Street, by Stewart and his company, 303 Associates, to make way for the projects. It is thought the building, built after World War II, had connections to African American History and Robert Smalls’ family.

Residents have commented at meetings on the project and have turned to social media in the last month or so to voice their outrage over the demolition.

“How did this happen?” one commenter among many said on Facebook.

“Outrageous,” said another. “People should march downtown to bring attention to this. … I find it interesting that this wave of destruction was pushed thru (sic) during the pandemic.”

Several of the company’s projects, however, have been moving through the stages of approvals at various planning and Historic District Review Board (HDRB) meetings for years, as Stewart and his staff pointed out at the March 24 meeting.

“There have been at least 28 articles published in the (Island Packet – Beaufort) Gazette since 2013 describing our plans,” he also noted in a four-page letter, addressed to Historic Beaufort Foundation chairman’s John Troutman.

In addition, the projects have been discussed at public forums and in presentations like the one held on March 24, he said.

Stewart also said in his letter, that Historic Beaufort had “embarked on a campaign of misinformation and deceit” about the projects under Troutman’s leadership.

While tensions have flared between Stewart and Historic Beaufort Foundation (HBF), the HDRB has also come under fire from frustrated residents who said they weren’t properly notified about the meetings that included Stewart’s latest project at 211 Charles Street.

Stewart has plans to tear down the building currently on the site, once an A&P grocery store, to build a proposed three-story apartment complex.

The Cannon Building, as the complex is being called, will feature apartments with retail space along Charles Street, company representatives said in the March 24 presentation, though preliminary plans have not been approved yet.

Some residents at the HDRB’s February meeting said they received mailed notices from the city either the day before or the day of the meeting.

In addition, residents waiting to give comment at its recent meeting, after the issue of the Charles Street demolition was held over, became agitated when it first appeared they would not be allowed to speak at the online meeting.

However, the review board quickly made a motion to allow for public comment.

While the former grocery store building is more than 50 years old, the structure is not included on the city’s list of historic contributing properties. The review board is charged with going by that list when giving consideration to those buildings which may or may not be torn down, review board members said at its most recent meeting.

In addition, Stewart said he is merely following the rules set forth by the city and is not demolishing any historic buildings.

“We follow that list as has been the case for decades for people doing business in the city and in the historic district,” he told residents at his presentation.

But some have said the building’s exclusion from the list is an oversight on the part of the city.

“If that survey had been kept up-to-date that building might have been listed,” HBF’s current Executive Director Cynthia Jenkins said.

The list, last updated in 1997, is something former Mayor Billy Keyserling’s task force, formed in 2019 to address HBF’s seat on the Historic District Review Board and review the city’s preservation manuals, was planning to take up this year, she said.

Jenkins and others have also argued that structures that are at least 50 years old that meet various criteria such as contributing to a place’s architectural or cultural history, can be eligible for inclusion on The National Register of Historic Places and as such, offered certain protections and tax exceptions.

The loss of buildings and changes to the city’s overall “historic fabric” could also threaten the city’s standing as a National Landmark Historic District, she said.

“So when you’re talking about what is a threat, it’s the loss plus the infill that’s inappropriate or could have been built anywhere, with no special quality, and that’s out of scale,” she said.

Many residents and HDRB members alike at past meetings have taken issue with the height of Stewart’s projects including the hotel proposed for the corner of Scott and Port Republic Streets and the recently proposed apartment complex at the opposite end of the street.

“Height, scale and mass are the critical words,” Jenkins said, adding that those descriptions are taken directly from the Beaufort Preservation Manual.

their projects from previous 1800s-era structures such as the Beaufort Hotel and Sea Island Hotel, structures that no longer stand in downtown Beaufort. All were three stories or taller, they have pointed out.

But the Beaufort Hotel and the Sea Island Hotel sat on blocks of their own, with hardly anything around them, and facing the river, Jenkins countered.

“And they were not on the narrowest street in Beaufort,” she said, adding that they were proportionate to what was around them at that time.

Part of the zoning issues Beaufort is having in recent years, she said, has to do with allowing for a higher level of density that was never part of downtown Beaufort’s history.

“Historically, there were never this many buildings this big in Beaufort,” she said.

Questions and comments by residents at the end of the March 24 presentation and online at various meetings have been mixed ranging from those who said they thought the projects would be great for the economy or for the revitalization of Beaufort.

Others had issues with the mass and scale or various other factors with the projects.

Peggy and Ed Simmer who live directly across from the proposed apartment complex said they have met with project planners at 303 Associates who shared with them plans for the project.

“They have considered our thoughts and concerns, answered our questions, and have made changes based on our input,” Peggy Simmer said in an email. “We consider them good neighbors.”

The Simmers said they supported “thoughtful infill that compliments the historic fabric in the National Landmark Historic District” and believe that project has the potential to do that.

For that reason, they said they supported the demolition of the existing structure on the site.

“But only if there is a commitment to build an approved structure that fits within the mass and scale of the surrounding neighborhood,” she said. “We do have concerns that the original proposal exceeded appropriate mass and scale for this location.”

The email went on to say while the couple thought a three-story building might work well on Bay Street near the Elliott House and The Anchorage, they felt a two-story building would work much better at the corner of Charles and Port Republic.

“It is our understanding that 303 Associates plans to make some changes to the original plan to make it fit better at this location, and we look forward to seeing their revised plans,” she said.

While several of the review board’s members wanted to table the issue of demolition until the city’s permitting process was reviewed and the building could be examined by officials with the state’s historic preservation office, ultimately the board voted unanimously to approve the demolition of the building on the condition that demolition permits would not be issued until building permits are issued.

In the meantime, Stewart, a longtime Beaufort resident, has also argued that change has already occurred during his own time in the city and has pointed to the firm’s past projects such as the renovation of the Saltus building and dozens more.

In addition, he and The Beaufort Inn’s hospitality director Jonathan Sullivan, have said the projects would have a “great economic impact” on Beaufort.

“The economic impact directly to the taxpayers and to the local municipalities is just over $1 million a year in taxes, for property taxes, hospitality taxes and accommodation taxes,” Sullivan said.

Still there are those who remain concerned about what the new projects could mean to the changing face of Beaufort.

Jenkins, who took over the role of Historic Beaufort Foundation’s Executive Director in 2019, said the city is urgently in need of a comprehensive plan that looks at all of these issues and the core commercial district.

“You think about what changed Charleston,” she said. “It was hotels and the overdevelopment of it that required parking garages.”

We do not want to become another Charleston, she added.

“But we’re getting ready to turn a corner that we’ll never come back from.”

Mindy Lucas is the Beaufort reporter for The Island News and is a staff writer for Lowcountry Weekly. She can be reached at mindy.islandnews@gmail.com.