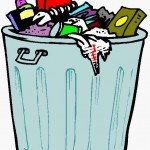 The driver of a Waste Pro trash truck has been cited after
two dumping incidents in less than 24 hours left portions of Hwy 170 littered with debris.
At approximately 4:00 pm last Thursday, Sheriff’s deputies responded to multiple reports by motorists of a trash truck dropping large amounts of garbage on the westbound lanes of Hwy 170 from the Broad River bridge to Snake Rd. Deputies were unable to make contact with the truck, however, a Sheriff’s Office Litter Control officer initiated an investigation.

After sorting through the debris found in the roadway, Litter Control was able to track the contents back to a
Waste Pro truck transporting garbage from St. Helena. Deputies then began to work to identify the driver of the
truck responsible for the litter.

At 10:00 am Friday morning, deputies would identify the driver as a second dumping incident occurred, this
time on Hwy 170 at the Chechessee River bridge. During this incident, large quantities of refuse was released
when the truck’s restraining net broke loose. The trash ultimately ended up blocking multiple lanes of traffic
and required more than 3 hours to remove.

The 32-year old Waste Pro employee was subsequently issued citations for Littering and Failure to Secure
Load in reference to the events occurring Thursday afternoon and Friday morning. No reports of property
damage were received as a result of the dropped debris, and the roadway was successfully cleared by Waste Pro
representatives.

From staff reports Hargray, a member of the Cable One family, recently donated 25 Chromebooks to

From the S.C. Department of Natural Resources The 2022-2023 season for recreational harvest of shellfish (clams