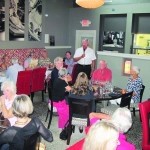 The first fundraiser for the upcoming 2012 Beaufort International Film Festival was a sold out success as over 80 people filled Breakwater Restaurant for a Wine Dinner fundraiser hosted by the Beaufort Film Society Ron Tucker Executive Director.  Ron spoke to those assembled about his excitement over the upcoming film festival and possible celebrities they hope will attend in February.

‘Cheeseburgers in Paradise’ a hit!