I am a family member of an individual who died by suicide. My son David, who was on the spectrum (autism) and extremely high functioning, did not want to be recognized as different from his peers. He wrote a letter declaring his ‘love’ for a young lady at school. She, not knowing how to respond, shared the letter with friends who shared the content with others. Some of these students started teasing him. David came home from school and ended his life.”

This was shared by Maria Beth Smith.

Suicide is something we just don’t talk about. When we don’t talk about suicide it’s impossible to understand the mindset of an individual experiencing thoughts, feelings or actions of suicide.

Defining suicide as something ugly and shameful takes away a safe place to seek support. Support that is necessary for both the individual at risk as well as their loved ones. How do we break this turbulent cycle?

We start the conversation.

Previously it was said a person “committed suicide.” This strongly indicated that suicide was a deliberate choice. This also insinuated some level of malicious intent such as a person who “commits a crime.”

Now the language of suicide reflects that with the term “died by suicide.” Suicide is a death caused by an illness.

According to the American Foundation for Suicide Prevention (AFSP), warning signs may include:

Talk: Of wanting to kill themselves, feeling hopeless or a burden, having no reason to live;

Behavior: Increased use of substances, withdrawing from activities, giving away prized possessions, isolating from family and friend;

Smith said,”David didn’t have the typical warning signs for suicide, but he did have some risk factors. David came from a ‘broken home,’ his parents were divorced. He had a family history of mental health conditions and suicide, a personal history of episodic depression, and was being harassed by his peers that day. He tended to be an introvert and not share his embarrassment or distress to anyone in the family when he got home from school.”

Knowing all the warning signs and risk factors isn’t a guarantee of suicide prevention. Often those left behind blame themselves for not doing or saying something. The most important thing to remember is that suicide is no one’s fault. We can take a proactive role to learn more and offer support where it’s needed. When someone dies by suicide, we all lose.

Some further resources on this topic can be found at www.survivorsofscuicide. com, Suicide Prevention Resource Center (sprc. org) and Suicide Awareness Voices of Education (save.org).

Laura Kaponer is a mental health advocate, blogger and Certified Peer Support Specialist. You can find her on social media by searching #Laurakaponeris1in5. 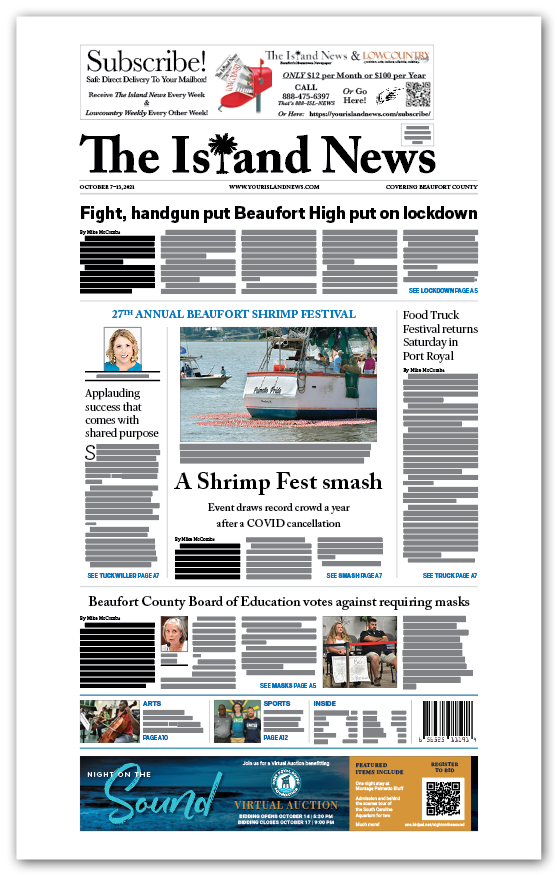 Special to the Island News Uninsured or underinsured hospitality workers in Beaufort
From staff reports Breast cancer is a big deal. A mammogram is
Tips on how seniors can avoid back and neck pain An aging
Kids are back in the classroom, and a common back-to-school sickness is
A new study looks at links between age of hypertension diagnosis and