With the giant outdoor lights turned off, the luminaries lining the track at Beaufort Middle School began to softly glow. The white bags — filled with sand and a candle and decorated with the names of family and friends — were also placed among the bleachers to spell the words “HOPE” and “LOVE.” A young woman took to the stage and sang Sarah McLaughlin’s hauntingly beautiful song, “Angel.” 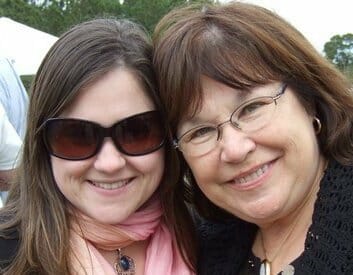 My small team had all briefly dispersed, leaving me alone under our tent to witness this touching scene at last year’s Relay For Life, a nationwide event that raises money for the American Cancer Society. I sat on a cooler and cried my eyes out. That song, “Angel,” played at my mother’s funeral just six months before, and in that moment, in the dark, I missed her so badly. When one friend returned, she gave me a big hug and we cried together.

For whatever reason, the only thing I could manage to say was, “I just wish my mom could have been here to see my kids.” I neither had kids nor was expecting, so it struck me as extremely poignant when I found out two weeks later that I was pregnant.

My mom’s battle with breast cancer included chemo, radiation, a masectomy, then six years in remission. During that time, she retired as a teacher, moved to Texas to be closer to family, traveled, and got to see two of her children married. But when the breast cancer returned unexpectedly as an aggressive brain tumor, it quickly took her life. I know everybody has to die, but my mom was healthy and vibrant and her time was cut too short.

I hope you will join all the dedicated members of the community who have worked tirelessly to make this year’s Relay For Life a memorable event. Stop by Beaufort Middle any time between 7 p.m. and 7 a.m. and walk the track, listen to music and see live local entertainment, participate in fun games and support the American Cancer Society by purchasing food or other items available.

The reason I’ll take my beautiful baby boy to Relay this year is to celebrate all the survivors, remember my amazing mother and the grandma he’ll never know, and fight back against this awful disease that affects the lives of so many people. As my dad said, “Pam, have faith that your efforts will help Wolfe’s family be cancer free.”

What’s your reason to Relay?

Good news; Beaufort isn’t fastest growing city in the nation  BEAUFORT – Did you catch the story

Vladimir got it wrong this time around

It is Saturday morning and I’m in Port Royal. There’s fog this morning — actually more

May we never forget freedom is not free

Memorial means to “remember,” and every year on the last Monday in May, we honor those

VA Housing Assistance and some things you need to know