Dating back to the first stock market system in the 1400s and 1500s, there has been a number of different approaches over the years. And no, I’m not going to start way back then so don’t worry.

Actually it was recently someone asked me if we used advanced computer algorithmic trading strategies in our research. There are many different approaches when it comes to selecting stocks as investments. Let’s look at a few that come to mind.

One is often referred to as “Sell in May and Go Away,” also sometimes called the “Halloween Indicator.” Basically, the theory is to buy stocks around Halloween because the market significantly growths stronger between November to April and the sell them in May and take your gains. 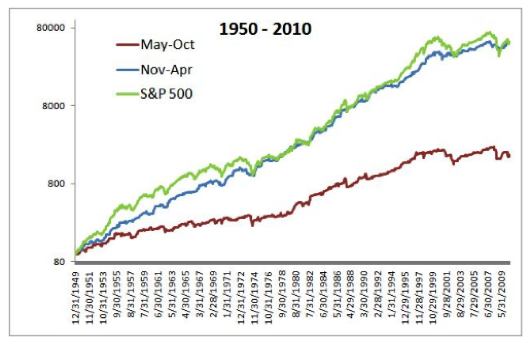 This one above has been around since 1950 popularized by Yale Hirsh.

Another dubbed “October Surprise” that pertains to avoiding the recurring October declines in the market.

While we are talking about the calendar, there is also the “December Loss” that is based on tax loss selling that occurs at the end of the fiscal year in yes you guessed it December.

Did you know that things like the amount of cloud coverage and temperature offer up their own methods?

A study by Cao and Wei was done in 1993 that showed from 1927 to 1989 the level of cloud cover outside a stock exchange was correlated to returns for a major stock market. In essence the days with less cloud cover the market performed better because people were in a better mood.

Temperature outside the stock exchange is negatively correlated with return performance in the same study, essentially, the lower the temperature the higher the returns. They believe the lower temperature tends to fuel aggressive risk taking psychologically and vice versa.

Let’s not forget the Hurricane Index introduced by the Chicago Mercantile Exchange in 2007 that is used in relation to Hurricane Derivatives contracts. They look at the maximum sustained winds and the radius of hurricane force winds.

There are many more approaches that exist and some have been around longer than others and naturally each one varies in its effectiveness in obtaining higher returns. However, what we find noteworthy throughout many approaches is they are based on actual data. And the data is obtained using research techniques.

The research has correlations that have been back-tested and repeatable, which supports the approach.

While we don’t use the above mentioned approaches, we do conduct research that looks at various types of data using a proven approach that was founded by Benjamin Graham and David Dodd back in the 1920s called “value investing.”

You most likely are not familiar with Graham, but you probably have heard of a couple of his students. Warren Buffett and Charlie Munger, chairman & CEO and vice chairman of Berkshire Hathaway respectively and both use “value investing” methods. It has held up to the test of time for over 85 years as being the most reliable at obtaining above average returns known to date.

For our money, “value investing” works the best.

To learn more about value investing research, contact me today for a complimentary meeting.

Volunteerism is a passion for Woman of the Year