By Tess Malijenovsky
For some families, cancer isn’t always a surprise. “I knew I had the breast cancer gene,” said Jennifer Redmond Strawn. “I lost my grandmother, great-grandmother, mother, aunt and young cousin who died a week before her 40th birthday.”
With two full time jobs as the United Hospice Volunteer Coordinator and mother of six children — 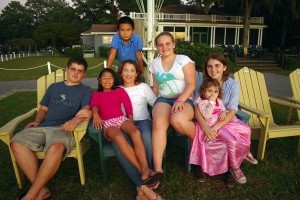 Hayden, Grace, Panyue, Kitty, Rebecca and Brian — Jennifer hoped she could trump her biological predisposition with a hopeful attitude: “My mom had breast cancer at 31 so I knew it was a possibility; but, at the same token, I’ve had a really positive outlook on life and I really never thought I’d get it.”
In March of 2008, just a year after her cousin passed from ovarian cancer, Jennifer was diagnosed with breast cancer. She had the triple negative cancer, meaning hormonal therapy would not be an option for Jennifer whose body didn’t respond to any of the three hormone receptors traditionally tested to fight cancer.
Jennifer was nursing her youngest, Hayden, around the time and consequently skimped on a proper mammogram because of the test’s harmful radiation. Just six months later in her sleep, Jennifer rolled over tucking her hand in her armpit and felt a marble-sized lump. “I knew immediately what it was,” she said.
Jennifer described the beginning of “getting cancer” as a wash of orders from the doctors; only later did the gravity of the diagnosis hit her. Her marriage ended abruptly as she was undergoing her chemotherapy, leaving Jennifer a single mother with not only a 1-year-old baby but five other kids.
“I was just straightforward. I told the kids I had cancer,” she explained. “They were upset because they knew my cousin passed away the year before. They were thinking, ‘oh my gosh, cancer, you’re going to die.’ It was heartbreaking for me thinking of my kids growing up without having a mother or parent in general.” However, Jennifer had faith in her doctors, Newberry and Burris, and great support from her friends, sister and church in keeping the children busy, preparing meals and helping out with household chores.
As a mother of a half dozen, Jennifer’s taken as many preventative measures as possible by having a double mastectomy and her ovaries removed. The two tumors were removed from her left lymph node, and by December of 2010 she was cleared of cancer. Psychologically, these surgeries are difficult for woman, but Jennifer gained sight of what was most important to her.
“When you’re faced with cancer diagnosis, every moment is precious and you realize what really matters. It burnt away the materialism and the superficial. I feel like God peeled everything away, all the junk, all the stuff that’s not important, and it just makes you so focused on him and on your family. It made my faith stronger,” Jennifer said.
Now Jennifer is staying healthy for her kids with good nutrition, muscular strengthening and cardiovascular exercise. She enjoys swimming on the Beaufort Masters Swim Team and doing yoga with the kids at Dancing Dogs yoga studio.
Jennifer is also looking for volunteers who can commit four hours to United Hospice. Volunteers do art therapy, pet therapy, music therapy and massage therapy. Also, party planners and volunteers to stand vigil while the patient is actively dying are needed. Contact Jennifer Redmond Strawn at 843-522-0476 or jrstrawn@uhs-pruitt.com to help out.

Library on St. Helena under way

Burton Firefighters Cory Hagan, left, and Lt./ Nick D’Angelo put up the last of the Letters

City will celebrate holidays this weekend

From staff reports HELP of Beaufort marked its “soon to be 50” year mark, with a