Photo above: Bluffton American Legion Post 205 extends its thanks the Bluffton Fire Department and the many local merchants for contributing to the success of the 11th Annual Legion Golf Tournament. With their contributions the legion was able to raise monies to help many community charitable causes. Shown here is Erich Schmid of the American Legion and the Honor Guard of the Bluffton Fire Department.

Certified facilities are recognized for their commitment to the protection of nature, efficient use of resources and providing positive community value.

The Golf Environment Organization is an international nonprofit dedicated to maximizing the use of clean energy, improving wildlife, air and water quality and pollution control throughout the golf industry.

“We are proud to collaborate with community initiatives that benefit (not only) our facility but also the Lowcountry destination that is known for golf and prioritizing care of the natural environment,” said Andy Hinson, the course’s director. 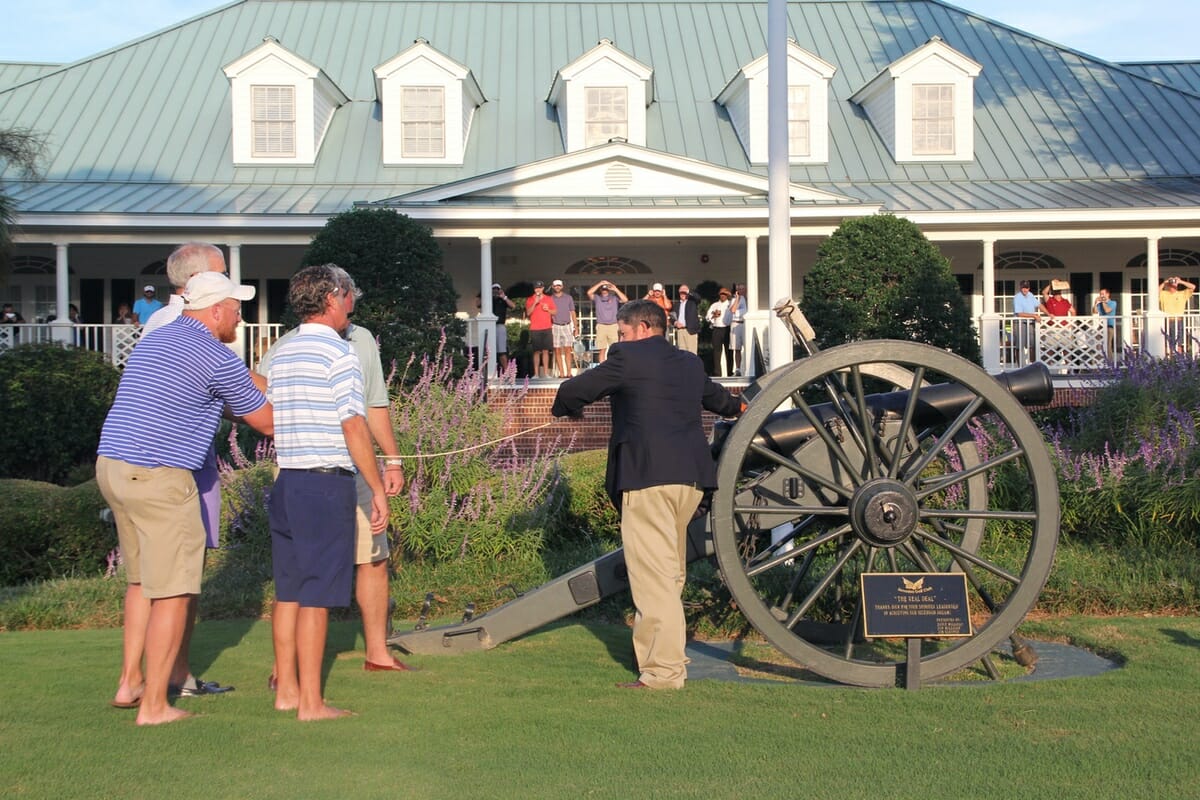 Proceeds from the tournament help further the mission of United Way of the Lowcountry by supporting partner agency grants, early grade reading initiative called Read Indeed and much more. Golfers from all over participated in the annual event. Kinghorn Insurance won the tournament and got to fire off the cannon.

Carson Young and Bluffton native Bryson Nimmer both had top 25 finishes to lead Clemson to a 10th place final standing at the Nike Golf Collegiate Invitational at famed Colonial Country Club in Fort Worth, Texas. The 15-team event included 12 of the top 25 teams in the nation, including seven of the top 10.

Clemson finished with an 869 team score on the par 70 course, just three shots more than No. 1-ranked Texas.

Vanderbilt won the tournament with a one under par team score of 839, one shot ahead of the University of Florida. Clemson had team scores of 286-292 and 291 over the three days and 54 holes.

Nimmer had the best score of the final day for the Tigers with a two over par 72. Young had a 73 in the final round.  Both players finished in a tie for 21st with scores of 214, four over par.

Freshman Doc Redman and junior Josh Fickes, a Beaufort native, had final round scores of 73. Redman finished 40th in the field of 75 players with a 220 score, while Fickes finished 52nd with a 224 score.  Freshman William Nottingham had a final round 77 to finish with a 225 score.

Larry Penley’s sixth-ranked Tigers will now have three weeks off before competing in the U.S. Collegiate in Alpharetta, Georgia October 21-23.

Camila Burnett turned in Bluffton’s second-best score, firing an 81 for the Bobcats.

Following Camila Burnett, Kayla McIntyre shot an 86 for  Bluffton during the tournament. As a team, Bluffton placed seventh with a team score of 339.

The Bluffton girls’ golf team is closing in on postseason competition.

Another Hilton Head High golfer, Morgan Caramello, contributed a 99 in the winning effort.

The Seahawks won convincingly. As a team, Hilton Head Island shot a 380, finishing 30 strokes ahead of the Beaufort High girls’ golf team, a longtime rival.

Following Hurricane Matthew, neither girls’ high school golf squad had much time to prepare for the regional event.

Ashley Taylor paced Beaufort High with a 92. Finishing second behind Taylor for the Eagles, Izzy Stone added a 95.

High school golf teams from throughout the area and around the state are taking to courses for postseason competition in hope of claiming championships.

Sailing regatta to be held Oct. 29

The regatta is open to mono hull sailboats that are at least 18-feet LOA. The US Sailing PHRF rating system will be used to determine boat handicaps. Boats will be divided into two groups based on PHRF ratings with the one boat from either group with the fastest corrected time being the overall winner of the Data Cup.

Registration is $35 per boat and forms are available at www.Datawyachtclub.com.

There will also be a welcoming party and Skippers Meeting at the Gazebo (next to Dataw Marine) on Dataw Island at 6 p.m. Friday, Oct. 28.

Pinckney narrowed his college choice to Clemson and South Carolina.

An All-State competitor in the 1600 and 4×800 relay, Shaugnessy was coached by Max Mayo and Bill Wrightson in high school.

With the loss, Beaufort Academy slipped to 2-5. The Eagles are 1-2 in the region.

The Eagles, who are under the direction of head coach Scott Richards, were scheduled to visit Andrew Jackson Academy on Oct. 7.

Hurricane Matthew halted high school football programs from taking to the field for regular season games earlier in the month and the week of Oct. 9.

The South Carolina High School League (SCHSL) approved a second extension of the regular season. Now, playoffs would begin Nov. 18 with the state championship games set for Dec. 17 and 18 in Columbia.

Both Beaufort Academy and Thomas Heyward were able to play football games on Friday, Oct. 14.

Several area high school football teams are scheduled to return to the gridiron for regular season games on Friday, Oct. 21.

Hilton Head Christian Academy, a team which features only five members, amassed 141.5 points in the state meet, finishing only 1.5 points behind Spartanburg Day, a squad with 14 swimmers.

Michael finished second in the 100-yard butterfly and fifth in the 200-yard individual medley.

Sanders placed fifth in the 100-yard breaststroke and sixth in the 200-yard freestyle.

Annunziata posted a seventh-place finish in the 500-yard freestyle and placed ninth in the 100-yard breaststroke.

The May River boys’ swim team, in its first year of competition, finished third in the Class 3A State Swim Meet at the Sol Blatt Natatorium on Sept. 15.

Pacing May River in the state meet, standout Erek Nelson set a state record of 50.47 in the 100 backstroke. In addition to his record-setting individual effort, Nelson aided teammates Clayton Boyles, Camron Reid and Samuel Villalobos win the 200 medley relay in a time of 1:38:79.

Along with Nelson’s first-place individual performance, Reid won the 100 butterfly in a time of 52.00. Boyles also notched a first-place finish, winning the 100 breaststroke in 1:01.52.

Nelson placed second in the 200 individual medley, completing the event in a time of 1:58.83.

Villalobos, Boyles, Reid and Nelson teamed up to finished second with a time of 3:22.46 in the 400 freestyle relay.

Pacing the May River girls’ team, Kaitlyn Pangilinan finished first with a time of 5:12.14 in the 500 freestyle.

Kevin Geist led May River to a fourth-place finish behind third-place Myrtle Beach, runner-up Aiken  and champion Eastside. Geist won the 100 butterfly with a time of 53.20 and placed second in the 200 freestyle. He finished the 200 freestyle in 1:47.40.

In women’s diving, freshman Kayla Wofford won the three-meter with 229.80 points. In one meter, Isabella Farrell was second 225.40 while freshman Rebecca Hetrick was third 213.55.

The men’s and women’s swimming and diving teams are both off until the weekend of Oct. 21-22, when the teams will split with some swimmers going to the Pacific Invitational in Stockton, Calif, and some staying home for dual meet with Colorado Mines.