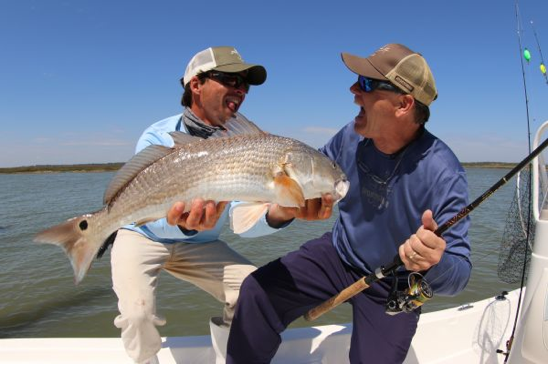 When Larry Youngblood of Walterboro landed a slot-sized redfish in Rantowles Creek recently, his excitement quickly waned when he noticed a tag protruding from the fish’s body.

He feared it was a CCA South Carolina STAR tag, which is good for a free Sea Hunt boat, but only for anglers who are registered for the summer-long tournament.

And Youngblood, who had been planning to register for the STAR, had failed to do so before his week-long trip to the coast. He dreaded the thought of this being one of the STAR tags. Luckily for him, the tag turned out to be from a Charleston fishing guide who tagged the fish in May.

With that fish in the cooler, Youngblood did what he’d been meaning to do since Memorial Day. He pulled out his cell phone, went to ccasouthcarolina.com, and signed up for the STAR.

The first two CCA South Carolina members who are registered and catch redfish with an appropriate tag can win one of two Sea Hunt BX 22 BR Bay Boats equipped with a Yamaha 150 and a Wesco aluminum trailer. Each boat package is valued at over $40,000.

The tournament began on Memorial Day and runs through Labor Day. So far, no one has claimed either of the boats. If no registered angler catches one of the 48 tagged redfish that were caught, tagged and released by CCA South Carolina members earlier this year, one lucky winner will be drawn from the list of anglers who have signed up for the tournament.

To participate in this tournament, you must be a member of CCA and register for the tournament. Visit membership.joincca.org/web/Online/Star_Home.aspx.

Ashley Green, Carson Schoeppe and Brooke Standard all scored goals for the Beaufort County Football Club in the victory over Lake Norman Eclipse.

The 2017 season is Beaufort County’s inaugural season at the WPSL level. Beaufort County is a member of The Carolinas Conference, along with several well-established franchises. Beaufort County plays its home matches at Hilton Head Preparatory School in Sea Pines on Hilton Head Island. Several members of the current squad have played in and won the National W-20 league.

The Sanctuary Golf Club is hosting 9 ‘N Dine every other Friday through September.

S.C. in the national spotlight

By Justin JarrettLowcoSports.com It was a long climb to the top, but the Beaufort High boys

Eagles fall in Lower State semis LowcoSports.com It was an uphill fight in the Class 3A

It’s all in the numbers at BA