A new exhibit that illuminates a fascinating era in the history of South Carolina and the nation is on display at the Beaufort History Museum.

During Reconstruction, the period immediately following the Civil War, most of the South was suffering from devastation and upheaval. But due to the enterprising spirit of newly freed slaves and an overlapping series of events, Beaufort and the Sea Islands were propelled into a period of recovery, resurgence and prosperity.

Titled “Islands of Hope in a Sea of Distress,” the new exhibit tells the stories of Reconstruction in the Beaufort area through original photos, text, documents and artifacts.

Lawrence S. Rowland, professor emeritus at the University of South Carolina Beaufort and authority on the history of the Beaufort district, said, “The Reconstruction Period of American history (1865-1877) began in Beaufort. It was the most radical social transformation the nation has experienced. The Reconstruction Period in Beaufort changed the town and the Sea Island region forever. This is where the ‘New South’ began. This exhibit recounts Beaufort’s unique part in this national story.”

Katherine Lang, a BHM board member and former president, conceived the idea for the exhibit more than a year ago and, along with other committee members, has been instrumental in bringing the project to fruition.

“The exhibit is something that Beaufort Mayor Billy Keyserling and I had talked about for a while. He pointed out that Reconstruction was a pivotal era that unfolded here in an especially significant way,” she said. “It just seemed, with the museum back at the Arsenal, we now had the space and the resources to create an historically relevant new exhibit, and focusing on Reconstruction in Beaufort was now an idea whose time had come. So we secured funding, formed a committee with resourceful board members and we were off and running.”

Reconstruction in Beaufort began earlier than in other areas in the South.

Following the Battle of Port Royal in 1861, Union troops occupied Beaufort and established headquarters, supply centers and medical facilities. Local white planters fled. With the Civil War still raging, 10,000 slaves were liberated in the Beaufort district. Schools were for whites only and it was illegal to teach slaves to read. Northern missionaries established the Penn School and Mather School to educate the newly freed men, women and children as part of the Port Royal Experiment.

Robert Smalls, who was born a slave here, helped lead Beaufort through Reconstruction. Business boomed. The sources of prosperity were timber, phosphates and shipping, all spurred on by the completion of the Port Royal Railroad in 1873, which provided the means to more efficiently transport products into and out of the area. Former slaves came to own land as freedmen and agriculture flourished.

With this story as the backdrop, Lang said the committee decided to focus the exhibit on four main areas: Education, Politics, Commerce and Agriculture, acquiring photos and artifacts to support the narrative.

“Actually, we are still actively sourcing more photos, documents, family oral histories, artifacts and other things to add to the exhibit,” said Lang. “We would very much like to hear from local residents who have something from the Reconstruction era to share with us.”

The Arsenal is at 713 Craven St. It is open from 10 a.m. to 4 p.m. Monday-Saturday. Docents are on duty to provide information and conduct tours.

A donation of $5 per visitor ($4 for seniors) is required. Children and active military are admitted free of charge. 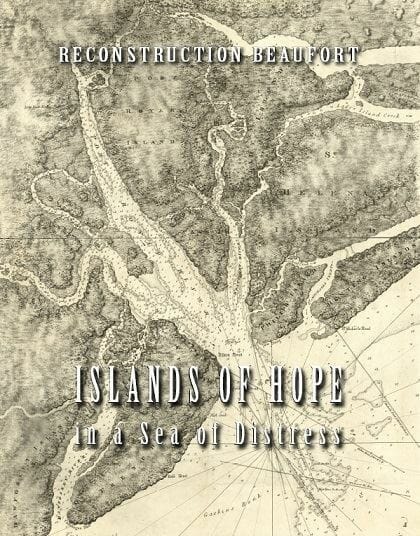 One-year-old franternal twins Amias and Kami Middleton sit in the shade while
Willy Rivas, 8, wasn’t wasting time with his painting efforts during Saturday’s
From staff reports Beaufort Homes for the Holidays is celebrating with the
Famous Beaufort residence The Castle, long rumored to be haunted, open for Halloween
From staff reports  More than 175 Beaufort Regional Chamber of Commerce and