A Hollywood, S.C., man accused of two murders and other crimes across the Lowcountry has been given four life sentences after pleading in Beaufort County General Sessions Court on Nov. 6.

Jerry Lee Manigault was to face trial on charges of murder, criminal sexual conduct and first-degree burglary in the May 12, 2014, death of 70-year-old Bluffton resident Polly Ann Mitchell. He also was charged in Charleston County for the murder of Julia Mudgett, 77, who lived near Manigault in Hollywood and was killed about six days before Mitchell.

Instead, Manigault entered a plea to accept four life-without-parole sentences for murder and burglary charges associated with the women’s deaths. He also received 30 years for sexually assaulting Mitchell and 15 years for the strong-armed robbery of Mudgett.

He was a person of interest in Mudgett’s disappearance and was being sought by the U.S. Marshals Service for failure to register as a sex offender when he was spotted and arrested in Bluffton.

Hours later, a family member discovered Mitchell’s body in her Buck Island home. She had been sexually assaulted and strangled with a television power cord.

When Manigault was arrested, he had a backpack belonging to Mitchell. His clothing and money he carried in his pocket were stained with Mitchell’s blood. Manigault was wearing Mitchell’s ring on one of his fingers, and his DNA was found on the power cord used to strangle her. Traces of Manigault’s flesh were removed from beneath Mitchell’s fingernails.

One witness told authorities he saw Manigault near Mitchell’s house the night before her body was discovered. Others said Manigault, who grew up in Bluffton, had recently returned to the Buck Island Road area and had been trying to sell a maroon Hyundai Elantra.

That car, which belonged to Mudgett, was recovered from Tuten Landing Road in Ridgeland on May 12, 2014. A witness told authorities he abandoned it there a few days after purchasing the vehicle from Manigault.

After Mudgett’s body was discovered in a wooded area near her home, Manigault was charged with her murder, as well.

Man is wanted for not registering as sex offender

Candido Villalobos Salazar is wanted by the Beaufort County Sheriff’s Office for failing to register as a sex offender third offense.

He is known to frequent the area of Tekoa Lane in Beaufort.

He has numerous tattoos that include the name “Salazar” on the right side of his neck; and tattoos on his arms and head.

Home invasion, gunshots are being investigated

The Beaufort County Sheriff’s Office is investigating a home invasion and gunshots on Old Jericho Road in Burton.

At about 3 a.m. on Nov. 8, it was reported that several adults and an infant were located inside the residence when unknown subjects, some armed with handguns, forced their way into the home and began firing shots.

All of them had their faces covered and fled the scene prior to deputies arriving. No one was injured during the incident.

Anyone with information regarding the identities of any subject involved is urged to call 911 or Cpl. Jennifer Snider at 843-255-3421. To remain anonymous and to collect a possible reward, call CrimeStoppers at 1-888-CRIME-SC (274-6372).

A shooting occurred at about 7:30 p.m. Nov. 7 in the parking lot of the Tiger Express convenience store on Sea Island Parkway on St. Helena Island.

After the shooting, an adult male victim was transported to Beaufort Memorial Hospital and later flown to the Medical University of South Carolina for treatment of gunshot wounds.

Further information was unavailable. The sheriff’s office is asking that anyone with information contact Sgt. Adam Draisen at 843-255-3409 or CrimeStoppers at 1-888-CrimeSC to remain anonymous and for a possible reward. 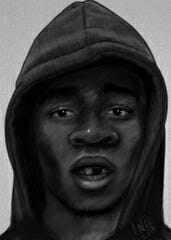 The victim in an attempted sexual assault near the Bluestone Apartments in Bluffton recently met with a forensic artist from the South Carolina Law Enforcement Division at the Beaufort County Sheriff’s Office.

The forensic artist then created a composite sketch of the suspect.

The suspect was described as an African-American male between 5 feet, 3 inches tall and 5 feet, 6 inches tall with a slender build, possibly in his 30s.

He has a crooked nose (maybe from a prior broken nose). The man was described as missing an upper front tooth and smelled of alcohol and cigarettes.

He was wearing a black or dark hooded sweatshirt and latex medical/food services style gloves (color unknown). And of particular significance, the subject was described by the victim as having a speech impediment — possibly a lisp — as the victim noticed the subject had problems pronouncing words that contained the letter “s”.

Anyone with information can contact Sgt. Seth Reynells at 843-255-3709 or CrimeStoppers at 1-888-CrimeSC to remain anonymous and for a possible reward.

Anderson had talked to his girlfriend and others late morning but was unable to be reached by the early afternoon. He was found later that evening when friends checked on him at his residence.

Through the investigation, it was learned that Anderson dealt marijuana and other illegal narcotics. Items in his home supported this finding. At the time of his death, it was believed Anderson may have had a large amount of drugs and cash, making robbery a likely motive.

Persons of interest were identified and interviewed, although no physical evidence linking them to the crime was uncovered.

As with the vast majority of drug-related homicides, this investigation revealed questionable witnesses and various rumors, leading investigators in many different directions. Physical evidence collected during this investigation is still being evaluated in the hopes that improvements in forensic technologies will establish a link between suspects and the crime scene.