Man charged with solicitation of minor

David Miguel Medina, 39, of Ridgeland, has been arrested on two charges connected to the solicitation of a minor.

Investigators say Medina sent nude images to the minor victim and solicited him for sex via social media.

The case will be prosecuted by the Attorney General’s Office.

On June 24, 1972, Michael Steven Akey, 14, was reportedly abducted by an unknown white man driving a 1962-63 four-door Chevrolet near a watermelon patch at Trammell’s Market. In 1972, Trammell’s Market was located in the area of Joe Frazier Road and Godwin Road in Burton.

At the time of the abduction, he was in the company of two juvenile friends and all three were hitching and caught a ride with the subject.

While two were stealing watermelons, the subject drove off with Akey in the vehicle. Akey was not seen alive again.

The juvenile witnesses were unable to provide the identity of the subject.

On Feb. 8, 1978, workers discovered skeletal remains while clearing land near Whitehall Plantation on Lady’s Island. The remains were examined by a forensic pathologist and anthropologist and using existing available technology, it was believed the remains were those of Akey and he was interred in Beaufort National Cemetery.

During some criminal investigations, investigators might exhaust all credible leads in a case. When this happens, the case can become stagnant or what is typically known as “cold.” However, the Beaufort County Sheriff’s Office is making theses cold case files accessible to the public in hopes that someone might come forward with information that may not have yet been uncovered.

His last known address is in Bluffton. Mancilla-DeJesus may be driving a silver Nissan Frontier with SC tag FTD993. 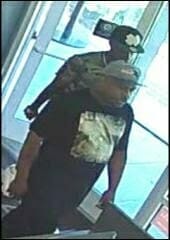 At about 2:30 p.m. on June 18, the pictured suspects entered Zales jewelry store at 1414 Fording Island Road in Bluffton and looked at merchandise for approximately 10 minutes.

They then asked to examine a ring. As one of the men put the ring on his finger, both men fled the store.

They were seen getting into a silver four-door Toyota with a Georgia tag, driven by a black  female.

In the wake of Hurricane Matthew and in the interest of providing a consistent message, the Beaufort County Sheriff’s Office, in coordination with other governmental and public utility entities serving Beaufort County, has made improvements to public information.

In the event of an emergency or natural disaster, the county primarily communicates with the public via e-mail and text through its NIXLE alert and advisory system, which links to social media sites such as Facebook and Twitter.

County officials are asking residents to visit www.bcso.net and subscribe to the NIXLE alert and advisory system to receive up-to-date information from the Beaufort County Sheriff’s Office.

In addition, there will be an alert link at www.bcso.net, where those who have not subscribed to NIXLE can also access information.

These 911 dispatchers are the heartbeat of the nation’s 911 system and are the professionals called upon to ensure that Beaufort County citizens receive the best emergency communications and dispatch services by remaining calm, gathering information and providing assistance to individuals in need.

911 dispatcher jobs require excellent communication skills and the ability to work under stressful situations. 911 operators take all applicable information from the caller, including details and the address of the emergency. While gathering information, 911 operators are then able to dispatch the appropriate agency personnel to assist the needs of the caller.

911 dispatcher jobs require candidates with some technical savvy, as they will be responsible for operating advanced emergency communications systems through their computers.

Take steps to ensure your home is protected

Callawassie named ‘Best of the Best’