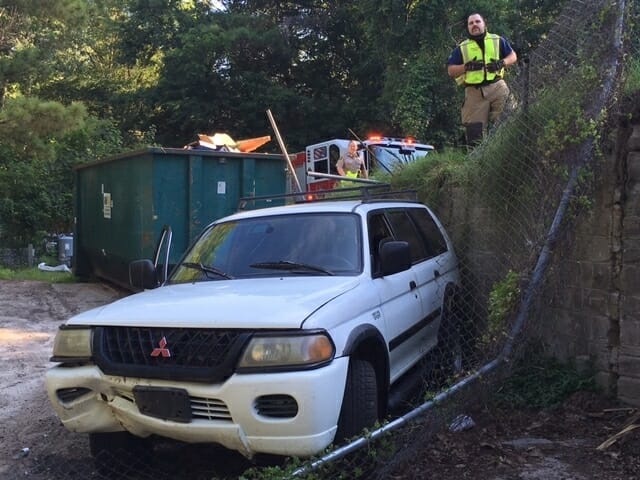 Initial reports stated a vehicle had driven off the elevated platform.

Burton firefighters arrived on the scene to find an SUV had driven through a fence and off the elevated platform leading to trash bins. The occupants had left the scene.

Burton firefighters checked for safety and environmental hazards and found none. The scene was turned over to Beaufort County Sheriff’s Office.

She was last seen at her home on Walter Road in the Stanley Farms area of Burton. Riley was wearing a red, white and blue sundress and was not wearing shoes.

She is an an African-American female who is 5 feet, 8 inches tall and weighs approximately 110 pounds. She has long hair with red tips.

Anyone with information can call the Beaufort County Sheriff’s Office dispatch at 843-524-2777.

A Seabrook home was saved on July 4 after a homeowner alerted a neighbor who then responded with a fire extinguisher and quelled flames inside an oven before they could do any damage.

The Burton Fire District responded to a report of a house fire on Delany Circle in Seabrook just before 5 p.m. Firefighters arrived on the scene to find light smoke inside the residence but no flames thanks to a neighbor’s use of a fire extinguisher.

The fire started in the oven while the oven was self cleaning.

Burton firefighters utilized a thermal imaging camera to ensure that the heat from the fire did not start a fire in the walls, and also assisted the family by removing smoke from the home.

The family, including children, evacuated the home. The home had working smoke detectors.

Burton fire officials stress the importance of every home having a properly working fire extinguisher less than five years old that is mounted in an easily accessible place in their home – preferably by an exit. Officials caution placing fire extinguishers under kitchen sinks, often right next to the stove/oven where most home fires occur, or in closets where they are not seen and readably accessible.

The Beaufort County Sheriff’s Office responded at about 11:30 p.m. July 7 to Port Royal Plaza on Hilton Head Island to a report of shots being fired from a vehicle in the parking lot.

Patrons at Street Meet restaurant contacted 911 after hearing two shots being fired from a vehicle in the parking lot. No one was injured and no damage to property was reported.

Multiple customers who heard and saw the shooting were able to provide deputies with suspect and vehicle descriptions.

A short time later, deputies observed a vehicle matching the description at The Pantry on Mathews Drive. As deputies approached, the two suspects ran away.

Christopher Mullen, 30, of Bluffton, and Darren Mahaffey, 27, of Hilton Head Island, were caught by deputies after a short foot chase.

They were charged with fleeing to evade arrest.

According to the sheriff’s office, Mullen was armed with a handgun at the time of his arrest and was subsequently charged with unlawful carrying of a firearm, discharging a firearm within the town limits of Hilton Head and public disorderly conduct. Mahaffey had an outstanding warrant for assault and battery from a prior incident.

Both were taken to the Beaufort County Detention Center.

The Beaufort County Sheriff’s Office is searching for the pictured suspect, who they say has made several fraudulent charges with a cloned credit card at several gas stations in Beaufort County.