A former physician’s assistant who smothered his live-in girlfriend with bubble wrap in their Palmetto Dunes condominium has been found guilty of murder.

“It takes 3 minutes to 5 minutes to make someone stop breathing with bubble wrap,” said 14th Circuit Solicitor’s Office prosecutor Hunter Swanson. “The sheer violence of the act and the vulnerability of the victim in her naked and unarmed state made it a horrible act and a nightmare scenario.”

Rebecca Sue Melton’s nude body was discovered Sept. 4, 2014, on a bedroom floor by Palmetto Dunes security and Beaufort County Sheriff’s Office deputies called to the home for a welfare check because co-workers had not heard from Evangelista for several days. Melton’s body was surrounded by green bubble wrap and blood. She had been dead for at least a week.

Evangelista was on the run until Oct. 1, 2014, when he was pulled over by deputies in Escambia County, Fla., who spotted him driving Melton’s white Jeep Wrangler. Among the items found inside was a journal.

Swanson shared excerpts from the journal with the jury: It said “I took the life of a good and beautiful person.” Evangelista also wrote that his pattern of abuse to this point had always been “verbal only, never physical,” but that he “became something in the end” that he “couldn’t control.”

While on the run, Evangelista took “selfies” on a prepaid phone and sent them to an escort. He invited one to his “upscale hotel” on the Florida beach.

Channon Preston Jr., 18, and Symone Jones, 20, both of Lady’s Island, have been charged with murder in relation to the Nov. 21 deaths of Robert and Chaz Blanding.

Symone Jones turned herself in to investigators in Beaufort, where she was arrested and served with the two warrants. Jones was transported to the Beaufort County Detention Center.

Channon Preston Jr. was served with the two arrest warrants for murder at the Beaufort County Detention Center, where he has remained incarcerated since Dec. 1 on two counts of accessory after the fact of murder in connection with the investigation.

Jones is the fourth person arrested in the murders of the Blandings. On Nov. 28, Raheem Bennett, 18, was arrested, and on Dec. 1, Nashon Pringle, 18, was arrested, both on two counts each for murder and possession of a weapon in the commission of a violent crime, according to a press release.

The investigation into the murders of Robert and Chaz Blanding is ongoing. Anyone with information is encouraged to contact Sgt. Brandon Disbrow at 843-255-3407 or CrimeStoppers at 1-888-CrimeSC to remain anonymous and for a possible reward. 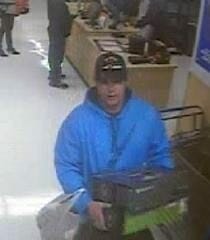 Following several fraudulent credit card transactions at retailers in Bluffton and Walterboro, it was discovered that the credit cards were stolen from members at two different health clubs between Dec. 7-8, one in the Port Royal area and the other on Hilton Head Island.

The health club members reported that they had left their clothing containing wallets with cash and credit cards unsecured in the locker rooms.

The Beaufort County Sheriff’s Office obtained video footage of a white man when he used the health club members’ credit cards in the fraudulent transactions.

Anyone who recognizes the man in the photograph or has information regarding this investigation is encouraged to contact Sgt. Doug Seifert at 843-255-3414 or CrimeStoppers at 1-888-CrimeSC to remain anonymous and for a possible reward.

Howard is known to be in the St. Helena Island area. He is approximately 52 years old, 5 feet, 9 inches tall and weighs 190 pounds.

He has black/gray hair with a gray goatee.

Anyone with information can call Investigator Moreno at 843-255-3505 or CrimeStoppers at 1-888-CrimeSC to remain anonymous and for a possible reward.

Devante Trevon Major is wanted by the Beaufort County Sheriff’s Office on charges of attempted murder and possession of a weapon during a violent crime.

He is known to be in the Delaney Circle area of Seabrook.

He should be considered armed and dangerous.

Anyone with information can call Sgt. Malphrus at 843-255-3426 or CrimeStoppers at 1-888-CrimeSC to remain anonymous and for a possible reward.

They arrived on the scene to find a passenger approximately 100 feet off the roadway and in the marsh with the female driver inside.

Firefighters made their way out to the vehicle to assist the driver, who appeared to have non-life threatening injuries. They were able to assist her to the shore. She was transported to the hospital.