A Ridgeland man who broke into a 61-year-old woman’s house and sexually assaulted her has been sentenced to 28 years in prison.

The burglary and attack occurred at about10:35 p.m. on Aug. 16, 2015. The victim awoke to find an armed man standing in her bedroom. He told the woman that if she made any noises, “he would kill her,” according to the case’s prosecutor, Assistant Solicitor Patrick Hall.

To distract the intruder, the woman told him there were some prescription medications in the kitchen. While he was in the kitchen, the woman fled the house and ran to a neighbor’s house. As she waited for the police to arrive, she spotted the attacker walking from behind her house.

DNA positively linked Jenkins as the person who raped the woman.

“Prosecuting sexual assault cases is taken very seriously and is a top priority by each prosecutor within our office,” said Assistant Solicitor Patrick Hall. “The state was ready to move forward with this case, but the defendant decided to plead guilty before a trial got underway.”

Jenkins’ prior record dates back to 2010 and includes convictions for drug distribution and indecent exposure.

A former North Carolina man who robbed a Ridgeland convenience store at gunpoint in 2016 has been sentenced to 18 years in prison.

The EZ Stop IV at 80 Blue Heron Drive in Ridgeland was robbed at gunpoint April 19, 2016.  A white man entered the convenience store, pointed a gun at the clerk and demanded money.

The clerk attempted unsuccessfully to talk the suspect out of the robbery, reminding him that there were surveillance cameras. The clerk ended up handing over $760 in cash.

Surveillance videos showed the suspect approaching the store and smoking a cigarette outside. The suspect then entered the store and robbed it. Ridgeland Police officers recovered the cigarette butt for testing and it matched to the defendant, who had been convicted in 2012 of breaking into vehicles and larceny.

In addition to the Ridgeland convenience store robbery, Anderson has also been linked to four armed robberies in Georgia, for which he has received a 40-month federal sentence.

Anderson was arrested in September 2016 in Florida.

“Within the first 2 minutes of being interviewed by Sgt. Chris McIntosh of the Ridgeland Police Department, James Anderson admitted to committing all of the armed robberies,” said Assistant Solicitor Patrick Hall.

In addition to regular daytime court schedules, Beaufort County Sheriff’s Office deputies will be scheduling traffic offenses to be heard weekly on Tuesdays nights in Beaufort and Thursday nights in Bluffton.

These night courts will only be hearing traffic offenses; jury trials and criminal offenses will remain scheduled for day courts.

This new schedule will provide residents and guests with options to appear before the court without having to take time off of work or interrupting other daily priorities.

Night court started on Aug. 1 and will be held at 7 p.m. Tuesdays at the Beaufort Magistrate Court located at 104 Ribaut Road in Beaufort.

Beaufort County Sheriff’s Office investigators are asking for information from the public on the whereabouts of Jeffrey Grant of Beaufort.

Grant is wanted on active arrest warrants for unlawful carrying of a pistol and possession with intent to distribute crack cocaine.

The arrest warrants stemmed from an investigation into a shooting incident that occurred at the Grays Hill Community Center on April 9.

Anyone with information on Grant’s whereabouts is urged to contact Sgt. Adam Draisen at 843-255-3409 or CrimeStoppers 1-888-CrimeSC to remain anonymous and for a possible reward.

Byron Singleton, 45, of Hardeeville, received a 20-year sentence for voluntary manslaughter and five years for possession of a weapon during the commission of a violence crime. The sentences will be served concurrently.

Singleton shot Manuel three times during a dispute on Nov. 12, 2014, on Church Street in Hardeeville. Witnesses said the men had a verbal disagreement over Singleton’s girlfriend the day of the shooting. Witnesses also said they heard three gunshots and later saw Singleton drive to Millstone Boat Landing in the Purrysburg community, where he tossed a gun into the river.

“This incident quickly escalated when the defendant decided to go and get a gun to deal with his problem,” said Jasper County Career Criminal Prosecutor Assistant Solicitor Mary Jones. “Mr. Singleton then tried to cover up his crime by tossing the gun and burning the clothes he wore during the shooting. It’s clear that he put a lot of thought into his actions and now he has the time to reflect on them.”

Singleton’s record dates to 1990 and includes armed robbery and criminal domestic violence. He must serve a minimum of 85 percent of his sentence before being eligible for parole. 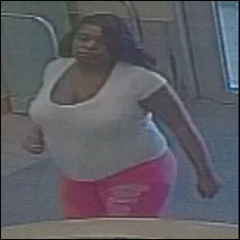 The Port Royal Police Department is seeking assistance in identifying the pictured individual.

They say the suspect used a stolen card at multiple places in Port Royal and attempted to use it in Beaufort. She is described as a black female wearing a white T-shirt and pink pants with shoulder length straight hair. She is approximately 5 feet, 9 inches tall and 225 pounds.