A man wanted in a Hilton Head burglary was arrested by Savannah police at a downtown bus station.

Tommy Troxell, 50, was wanted in connection with the Sept. 21 burglary of St. Andrew’s by the Sea Church.

Beaufort County Sheriff’s Office investigators attempted to locate Troxell at his last known address on the south end of Hilton Head Island and found he had left the area. However, following up on a lead provided by a concerned citizen, investigators determined Troxell was planning to leave the area via bus from the downtown Savannah Greyhound Station.

At about 11 p.m. on Sept. 26, Savannah-Chatham Metro Police Department officers arrested Troxell at the bus station.

There is no information on Troxell’s extradition status as of Oct. 3.

Burton Fire District firefighters responded to a fire on Joe Frazier Road just before 6:30 a.m. on Sept. 28 and found smoke and flames coming from the side of a single-story home.

They were able to quickly put the fire out, which was contained to the master bedroom area, saving the rest of the home.

No one was in the house and no injuries were reported. The Beaufort County Fire Scene Investigation Team is investigating the fire. Firefighters remained on scene for over three hours.

On Sept. 29, the Burton Fire District responded to a house fire at about 4:30 p.m. in the Habersham subdivision.

Burton firefighters, who have a fire station in the Habersham community, were on the scene in minutes, and reported heavy fire coming from a two-story home.

The fire was quickly brought under control; however firefighters remained on scene for over an hour. The homeowners were not home at the time of the fire, but the family dog died.

A Burton Fire District fire engine was involved in a minor accident on Parris Island Gateway on Sept. 30, resulting in two people being transported to Beaufort Memorial Hospital.

Burton firefighters were leaving a breast cancer awareness event on Parris Island when they noticed a motorist in distress on the side of the road. While the firefighters were en route to render aid to the disabled motorists, they were involved in a collision with a passenger vehicle, causing minor damages to both.

Burton firefighters were uninjured in the accident and two people in the passenger vehicle were transported to Beaufort Memorial Hospital with what appeared to be non-life threatening injuries.

The fire engine involved in the accident is being inspected for serviceability and emergency responses by the Burton Fire District will not be interrupted.

Car crash ends with vehicle on its side 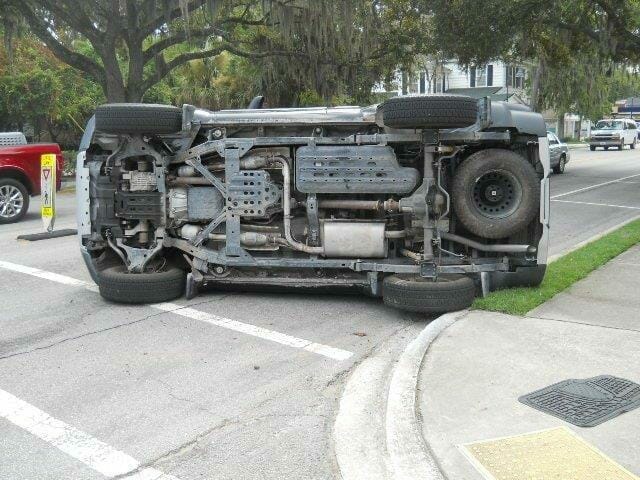 Beaufort Fire Rescue responded to a two-vehicle accident at about 11:43 p.m. Sept. 28 at the intersection of Carteret and Duke streets in Beaufort.

The driver of that vehicle and the two people in the other vehicle were not transported.

Man found dead on side of road

A 61-year-old Burton man, who was found on the side of a road, had been shot and killed, according to a Beaufort County Sheriff’s Office report.

A driver saw the body of Benjamin Campbell at about 9 a.m. Sept. 27 on Stanley Road in Burton and called 911.

Beaufort County Sheriff’s Office deputies responded to the scene and found the man dead, but the cause of death was undetermined. An autopsy was conducted at the Medical University of South Carolina, which determined that he had suffered multiple gunshot wounds.

Sheriff’s office investigators are asking the public to help identify the subject or subjects responsible for Campbell’s murder.

Anyone with information is urged to contact Cpl. Jennifer Snider at 843-255-3421, or CrimeStoppers 1-888-CrimeSC to remain anonymous and collect a possible reward.