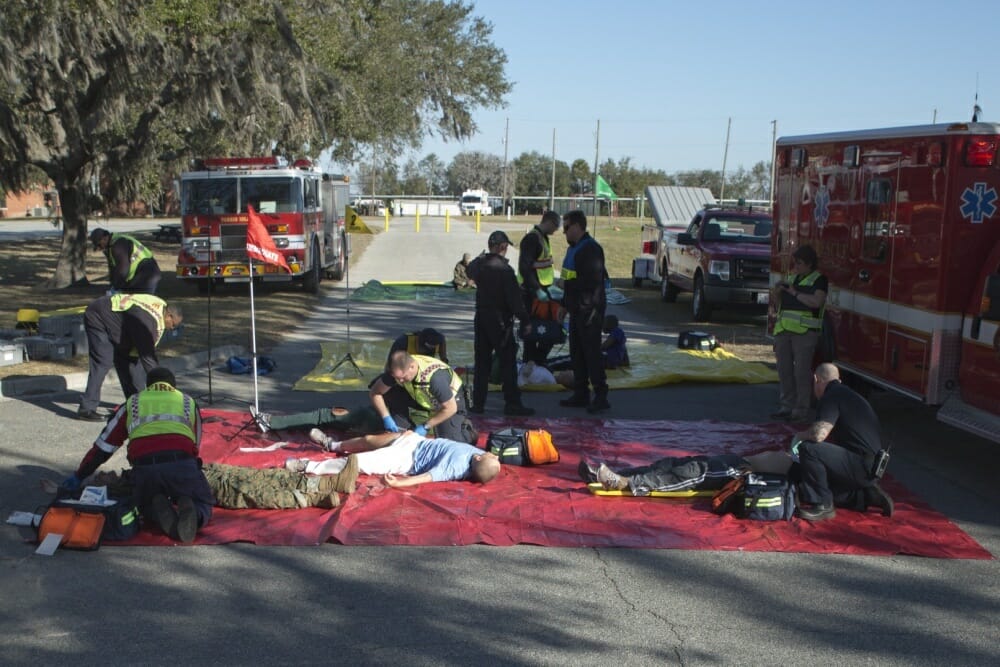 The exercise simulated an active shooter and hostage situation and was designed to test various aspects of the depot’s emergency response capabilities.

During the exercise, Marine Corps law enforcement officers responded to the All-Weather Training Facility after an active shooter entered and shot into a crowd of family day attendees before taking hostages in a closed room.

“When we conduct these types of exercises, we look at individual tactics for each department when responding to an emergency, but we also like to take the opportunity to look at how those groups work together as a team to respond to a more complex incident,” said Rick Scott, team leader for the Marine Corps Installation Command’s Regional Exercise Team-East. “Fortunately, those incidents don’t happen on a regular basis, so you have to take an opportunity to train when you can.”

Members of Parris Island’s Fire and Emergency Services also responded to provide medical triage and care and exercise their interoperability with their law enforcement counterparts.

After the exercise, officials will review the lessons learned and apply any necessary changes to ensure Parris Island is a safe as possible.

“That’s why we train,” said Michael Keller, the Parris Island Fire Department’s assistant fire chief of operations and on-scene incident commander during the exercise, “so that when the tragic and unexpected happen on base, we’re ready.”

The Beaufort City Council had a work session and public hearing recently to address the annexation of doughnut hole properties on Lady’s Island.

The Beaufort City Council voted unanimously Jan. 24 on the first of two readings to annex 67 parcels on Lady’s Island with a combined assessed value of $980,610.

Of those parcels, 56 include Secession Golf course, its offices, vacant lots and homes; the remaining 11 parcels are along Sea Island Parkway.

According to Mayor Billy Keyserling, in his weekly newsletter, “The annexation comes at no additional service charges except for $40,520 to the Lady’s Island Fire District, which provides primary fire protection under an existing contract agreement with the city. City officials project the additional properties will generate $125,000 annually in taxes and fees.”

Sanford staff to meet with constituents

Satellite office hours are conducted around the district by the representative’s staff in order to meet with constituents who require assistance with federal agencies, including Medicare, Veterans Affairs, Social Security, the Internal Revenue Service or even help processing a passport.

Additionally, anyone wishing to express an opinion or ask a question is welcome to stop by.

Sanford is not scheduled to be in attendance at these events.

Asphalt paving will take place between 7 a.m. and 5 p.m. on Little Capers/Shorts Landing Road (from Sam’s Point to Holly Hall) through Thursday, Feb. 9, on Lady’s Island.

The work could be intermittent during these times due to unfavorable weather conditions and unforeseen mechanical failures.

There will be lane closures, but traffic will be maintained through the use of traffic control devices.

Motorists are asked to use caution when driving through the work zone.

The next event will be held from 9 a.m. to 3 p.m. Saturday, Feb. 18, at Beaufort County Public Works at140 Shanklin Road in Beaufort.

For questions concerning this or other recycling events, call 843-255-2736 or visit www.bcgov.net/recycle.

Beaufort County is taking steps to help its employees get healthier and go smoke-free.

Effective March 1, smoking will be prohibited at all county-owned or operated facilities, parks and campuses.

Smoking will not be allowed on any county property, including in cars. Additionally, e-cigarettes will also be off limits.

“We are one of the top employers in the county and we feel it is our duty to create a healthier environment for our employees and residents,” said Beaufort County Administrator Gary Kubic. “This is only one piece of our overall plan to become a healthier Beaufort County.”

The county is offering healthy lifestyle resources to its employees, including granting access to the workout facilities at Buckwalter and Burton Wells Recreation Centers at no cost to all Beaufort County employees.

For employees who plan to quit smoking, the county is offering the Freedom From Smoking program, an eight-week smoking cessation course that will address different aspects of the quitting process each week and includes stress management techniques, education on craving and weight control while quitting.

Additionally, the county’s Communications and Accountability Department will kick off a multi-media #SmokeFreeBC campaign that will help to encourage employees and residents who want to quit smoking through video clips, inspirational photos, graphics and testimonials.

Beaufort County Mosquito Control may conduct aerial training, surveillance and/or spray missions that may include the application of EPA-registered public health insecticides during daylight hours through Friday, Feb. 10.

The low-flying aircraft and aerial spraying is dependent upon ideal weather. Mosquito control does not treat the salt marsh habitats for adult mosquitoes during these aerial operations.

The Child Abuse Prevention Association (CAPA) has once again achieved national accreditation through the New York-based Council on Accreditation (COA).

Organizations pursue accreditation to demonstrate the implementation of best practice standards in the field of human services.

COA evaluated all aspects of CAPA’s programs, services, management and administration. COA accreditation is an objective, independent and reliable validation of an agency’s performance.

The COA accreditation process involves a detailed review and analysis of an organization’s administration, management and service delivery functions against international standards of best practice.

The standards driving accreditation ensure that services are well-coordinated, culturally competent, evidence-based, outcomes-oriented and provided by a skilled and supported workforce.

The Child Abuse Prevention Association has been providing services to children and families of the Lowcountry since 1981.

Beaufort City Mayor Billy Keyserling will be the guest speaker at the Tuesday, Feb. 14, meeting of the Lady’s Island Business and Professional Association.

It will be held at 8 a.m. in the Beaufort County Realtors Headquarters located in the Palmetto Business Park, Lady’s Island Drive. The meeting is open to the public.

Keyserling was elected to his office in 2008 and reelected for additional terms of office in 2012 and 2016.

He will discuss whether Beaufort has a long-range plan for development of the commercial portion of Lady’s Island; the recent joint city/county traffic study of Sea Island Parkway; annexation; growth; and more.

Due to adequate winter rainfall for portions of South Carolina, the S.C. Drought Response Committee has updated the drought statuses of 15 counties.

All counties in the southern region, including Beaufort, were downgraded from incipient to normal.

“We voted to downgrade the drought for many counties due to increased rainfall over the last 30 to 60 days,” Colleton County Soil and Water Conservation District Commissioner Emeritus Marion Rizer said.

“Ironically, we are not able to get into the fields to fertilize small grains and to make preparations for spring planting because soil moisture conditions are too wet in some areas.”

Getting to heart of things helps love bloom