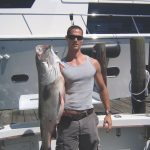 Just more than two years ago, Ian Hart came to The Lowcountry by way of New York City. Maybe it was the lull of the Lowcountry’s coastal charm, its cultural and historical richness, or even its promise to just be a brand new experience. No matter — because with Hart’s arrival came the launch of EarthFIT, a training facility that has not only helped change the lives of countless Beaufortonians, but also the business climate of our community.

A lifelong student of fitness, Hart lives and breathes personal training and coaching. His decision to move to the Lowcountry and open his own training facility was, for him, a means of realizing a pivotal goal.
“I wanted to open a training facility in a place where we (the EarthFIT team) could live, work and be a real part of the community,” Hart said. “When the opportunity to move into the Habersham Marketplace came about, I packed my bags and never looked back.”
Beginning the EarthFIT venture with only 600 square feet of working space, an instant demand was created, necessitating an almost overnight expansion. The rapid growth and increased interest and participation of members outside the Habersham community prompted Hart to take a step back, assess his clientele and meet the demand of the Lady’s Island populace.
This new location opened just weeks ago and is poised to be a very good neighbor. Its grand opening on Saturday, August 6 will help raise money to buy new physical fitness equipment for firefighters from the Lady’s Island-St. Helena Fire District.
How does such business success happen in a down economy? What makes Hart’s recipe for success so, well, successful?
Hart says “For us, the keys to success have been in providing more value than you get in return, truly caring about making a difference in peoples’ lives and guaranteeing results — and backing that guarantee up.”
In 2010 and 2011 Hart and EarthFIT were awarded multiple “Reader’s Choice” and “Beaufort Favorite’s” awards by The Beaufort Gazette and The Island News, respectively, and just a few months ago Hart was nominated for The Beaufort Regional Chamber of Commerce’s CIVITAS Awards as an “Outstanding Lowcountry Young Professional.”  On an international level, EarthFIT has been recognized for its state of the art “Back Pain Relief4Life” program — recently featured in Self Magazine.
“I’m extremely grateful to be doing what I love and what I believe I was meant to do.” Hart said. “If we can transfer just a portion of our passion for health and training to our clients and create a change in their lives, then we know we are successful. And that’s what it’s all about.”

By Mike McCombs Photos by Bob Sofaly In mid-April, when a group of deadly storms cut

Photo above: Beaufort Water Festival bed racers get a face full of water from an unidentified assailant

Oh, the places paddling can take you

Photo above: Maureen Conroy is a breast cancer survivor and will be competing in DragonBoat Beaufort races

Holly Bounds Jackson dishes about family, reporting and returning to the Lowcountry