Beaufort firefighters and police officers rescued a man and woman shrimping in the Beaufort River near Pigeon Point early Saturday, Oct. 1, when their boat began sinking — a rescue that possibly saved their lives. 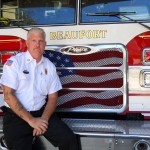 At 1:27 a.m. Saturday, the Beaufort-Port Royal Fire Department responded in their Quick Response Vehicle to a call of boaters in distress off Wilson Drive in Beaufort’s Pigeon Point neighborhood.
The couple had been shrimping near Brickyard Creek but found their boat taking on water about 60 feet from a dock. With the current running swiftly and the woman unable to swim, Beaufort Fire Captain Scott Robinson and Fire Inspector Stephen Baske took action.
Robinson decided the fastest and safest way to rescue the pair was to throw a rescue disk with a light line attached. He told the boaters to tie the line to their boat and then use it to pull a heavier rescue rope and flotation device to the boat. Within minutes, they had pulled the woman safely to shore where she was treated by Beaufort County EMS. 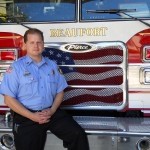 Still aboard the boat, the man pulled the rig back, put on the harness and entered the water.
As Baske and two Beaufort police officers pulled the man toward the dock, they noticed the boat moving, too, even as the strong current pushed the boat further from the dock.
The man’s arm was tangled in a line still attached to the boat as it continued sinking. Realizing the man could drown or suffer major damage to his arm, Baske took heroic action, Beaufort Fire Chief Sammy Negron said.
“Inspector Baske was wearing his protective equipment and had a rescue knife when he jumped into the water, swam out to the man and cut the rope tethering him to the sinking boat,” Negron said. “Captain Robinson and our two police officers swiftly pulled the man to safety, and Inspector Baske swam against the tide back to the dock.”
The Beaufort Marine Rescue Squadron removed the boat from the river, eliminating a waterway hazard.
“The quick planning by Captain Scott Robinson and the heroic action of Inspector Stephen Baske helped bring two people back safely to their families from what could have been a tragic night on the water. Their work was supported by Beaufort County EMS, our Fire Department, the Beaufort Police Department, Beaufort Marine Rescue Squadron and the Department of Natural Resources,” Negron said.

Out & About with Photographer Bob Sofaly

A sense of community

Good food, fellowship to be found at local community Thanksgiving dinners By Delayna Earley If you

And, oh, the pies… By Bob Sofaly  After a two-year hiatus because of COVID concerns, the