By Sherri Little
Once upon a time there was a young(ish) woman who was looking for some positive change in her life. She was a fairly happy person, with a loving husband, two wonderful young adult children, great friends and a satisfying job. But still, she felt like something was missing. She felt at a crossroads of sorts and found herself struggling, looking for a way to grow and find her “purpose” in life. She needed something new, something to spark the creativity and energy that she knew still existed somewhere deep within.
Encouraged by a girlfriend, she took a six-week yoga course, learning basic poses. She liked the class and felt great afterward. But she was sometimes lazy and only made four of the six sessions. So she signed up for the next series. She made three of those classes. 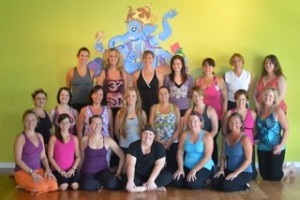 Meanwhile, she continued to struggle. Her days were mostly happy, especially at Happy Hour, or at the beach, or traveling to any destination with sand and palm trees. Life WAS good, just missing something.
One day, above mentioned girlfriend encouraged her to start going to yoga again. It had been six months since her last class and she had gained about 12 pounds over the year. She was feeling bloated and unattractive. So she began going to yoga classes fairly regularly and found she really enjoyed it. Still, she felt kind of “blah” and knew she needed to make some serious lifestyle changes. She wanted to be fit in body, sound in mind and lifted in spirit. At precisely that time, she saw a flyer with a big headline reading: Revolutionary Yoga Boot Camp. It will transform you!  (Cue the soundtrack from “Jaws” or “Psycho” —either would be appropriate.)
And so she enrolled for the eight day program.
Excited to begin her new journey, the student rolled out her yoga mat and Yogitoes and prepared to perspire a little. The room was heated, which the naïve student thought was pretty hip and cool. As she shook and wobbled into her 15th Vinyasa, concentrating equally on breathing and not vomiting, she wasn’t as convinced that she needed transforming. What she needed was to get out of that heated Hell and find a place where she could open an ice cold Corona—and whimper.
Having survived the first two days of boot camp, the student embarked on a “fruit feast,” touted by her perky and wise yoga instructor as an elixir to rid the body of toxins and to bring the mind into focus and awareness. Three days, six bananas, a mango, four avocados, three zucchini, four bell peppers, two cucumbers, five tomatoes, eight nectarines, a watermelon, a cantaloupe, numerous assorted berries and 14 figs later, her muscles were weary and her mind was mush. Still resolute, she trudged up the studio stairs, one aching leg followed by the other, rolled out her mat and sank into Child’s pose, silently cursing the first Downward Facing Dog that was coming.
Maybe it was an onset of a fruit coma. Maybe it was sheer exhaustion. But something was wrong. Bad wrong. The perky and wise instructor was nowhere to be found. Instead, a menacing, malevolent figure clad in spandex stood before the class.
“Utkatasana!” demanded the instructor. Beads of sweat already trickling from her forehead, she took a Chair pose.  “Lower!! Give me 10 more inches!!” yelled the spandex demon. She lowered her quivering rear four more inches. “Now hold it there. Squeeeeeeze. Rock back on your heels. Can ya feel it? Huh, can ya??” the instructor taunted. “OK, rise.”
Relief, she thought, her quads twitching randomly.
“UTKATASANA!!”
Oh, God, noooooooo, she silently pleaded. With her knees bent, quads shaking uncontrollably, arms wilting in the air, sweat spilling into her eyes, she sat back for another Chair pose. “Just breathe through it. Inhale. Exhale,” she thought. “Find your happy place.”
“YOU! GRASSHOPPER!! What do you think you’re doing?”
Another breath in, another breath out…keep going, she coaxed herself, not realizing the instructor had been bellowing at her.
“I said DROP LOWER!” the instructor screamed, inches from her grimacing, sweaty face.
“I can’t,” she mewled, suppressing both a sob and a fart.
“What do you mean you can’t? Where did you leave your ‘YES,’ Grasshopper?” the instructor mocked. “Be here. Be in the NOW. AND YOU BETTER BE IN A STINKING CHAIR POSE WHILE YOU’RE HERE AND NOW, understand??”
She lowered her butt one.more.inch. Deep breath in…and then she toppled to her perspiration-soaked mat, completely spent. Her quads were spasming uncontrollably, her breath coming in gasps, her hair matted to her forehead in a gnarled mess. The sadistic instructor lurched toward her and she began pleading, “Please, no more utkatasanas. I beg of you, Master, for the love of Ganesh, no more Chair poses.”
The merciless instructor began poking her and shaking her.  “Young(ish) woman, young(ish) woman, wake up, wake up. You’re having a nightmare.”
The young(ish) woman rubbed open her eyes and there in front of her stood the perky and wise instructor, smiling. “We were in Savasana and you were having a nightmare.”
“You mean I don’t have to do another Chair pose? Not even a Warrior Two?” she asked timidly.
“Not tonight,” the kind instructor answered. “That’s behind us. Maybe tomorrow, but that’s in front of us. Just be present. Be here. Right here, right now.”
For three more days, the young(ish) women stayed present on her mat, flowing through her Sun Salutations in cadence with her breath, reaching and turning into Prayer Twists as if she were wringing out a sponge, and even holding Eagle pose as her arms trembled and her ankles tottered.
She experienced many physical and mental breakthroughs that week and when graduation day arrived, the young(ish) woman felt accomplished and invincible. She had strength, focus and inspiration. With the spandex demon a distant memory, she turned to her perky and wise instructor and thanked her for inspiring a transformation.
“Just remember,” the wise instructor said with a mystical smile, “if you seek the truth, be willing to come apart, step out of your comfort zone, commit to growth, shift your vision, drop what you know, relax with what is, remove the rocks, don’t rush the process, be true to yourself, be still and know, and understand that the whole is the goal, your journey will continue, Grasshopper.”
Namaste

GERD is not ‘just’ heartburn

Holiday feasting can bring on indigestion. Gastroesophageal reflux disease (GERD) is one of the most common

What to know about shots for arthritis

Can music help someone with Alzheimer’s disease?