The Eleventh Annual Beaufort International Film Festival will host thousands of film lovers from around the world from Tuesday, Feb. 15, and continuing through Sunday, Feb. 19.

Organizers are expecting their biggest crowd to date at one of the fastest growing film festivals in the Southeast.

Due to its popularity, the festival has expanded to five days.

“This will allow for more screenings to occur on Saturday night,” said Ron Tucker, co-founder of the Beaufort Film Society.

“We are honored to have one world premiere film, ‘Trigger: The Ripple Effect of Gun Violence,’ one East Coast premiere, ‘Saturn Returns’ and one Southern U.S. premiere, a student film, ‘Icarus,’” said Tucker.

At most of the screenings, the filmmakers will attend their own film showings.

“At this time, we have over 50 commitments from filmmakers planning to attend the festival,” said Tucker.

Awards will be presented in the areas of Features, Documentaries, Short Films, Student Films, Screenplays, Animation, Comedy and Audience Choice. Also, winners will be named for Best Actor, Best Actress and Best Director.

In addition to the category and individual awards, the inaugural Robert Smalls Merit & Achievement Award will be presented to trailblazing filmmaker Julie Dash.

“This award was created to recognize a filmmaker whose body of work has served as a catalyst for groundbreaking discoveries and societal change. Ms. Dash’s accomplishments during the last quarter century certainly meet this criterion,” said Tucker.

Filmed in Beaufort, Dash’s “Daughters of the Dust” has been restored and re-released as part of its 25th anniversary.

“We are very fortunate to be selected as one the screening locations for the limited theatrical re-release during the festival,” said Rebecca Tucker, co-founder of the Beaufort Film Society. “And following the screening, a panel will discussion will take place with the filmmaker, local cast and crew.”

Filmmaker Brad Jayne will receive the Behind the Scenes Award for his notable accomplishments over the past 15 years, which include working closely with the South Carolina Film Commission’s Indie Grants and Young Filmmakers programs.

Also new to the festival this year is the Film and Digital Media Symposium. Presented in a partnership with the USCB Media Arts Department, the event is free and open to the public.

“We are optimistic the symposium will help pave the way to a stronger relationship concerning the importance and value of a Digital Media Arts program and the Beaufort Film Society,” said Rebecca Tucker.

“If you are a film lover, this is a great opportunity to learn about all the work that takes place behind the scenes,” said director and producer VW Schiech, who will present a class on visual film effects at the symposium.

Schiech said he is also looking forward to the Thursday, Feb. 16, screenwriter’s workshop, which pairs the top nominated screenplays with local actors in a live table read.

“I have been to a lot of festivals all over the country, and I’ve never seen this. BIFF does something no one else is doing,” said Schiech. 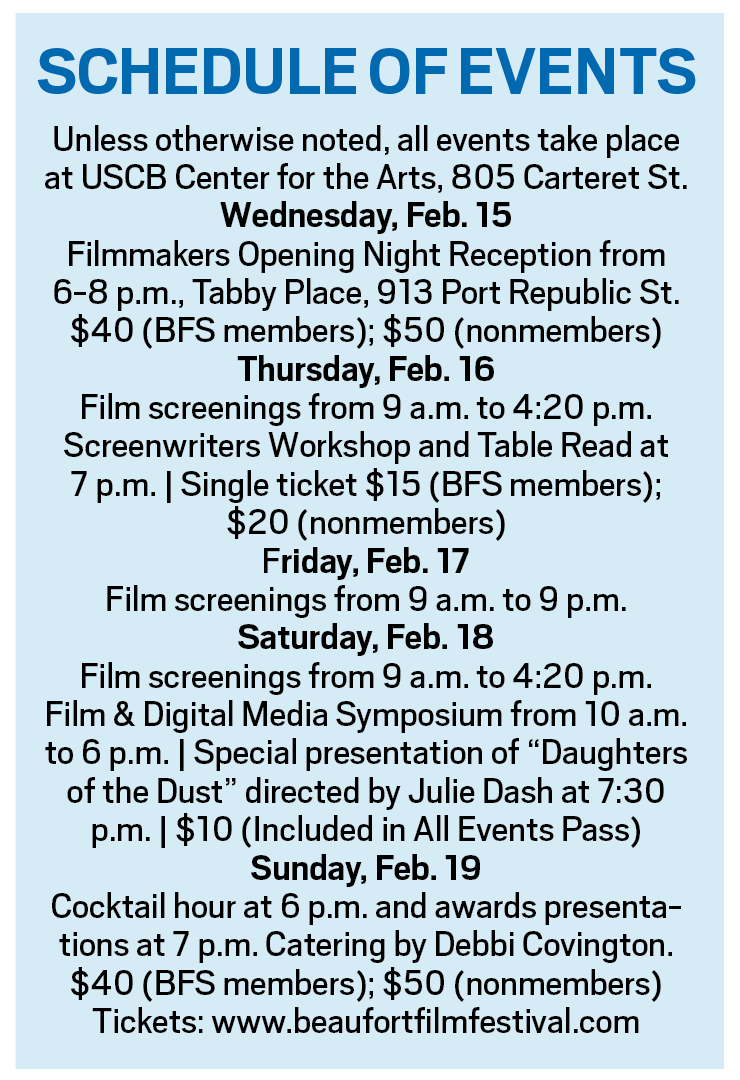