While the pandemic may have put a damper on local watch parties, millions of Americans are still expected to tune in for the first presidential debate between President Donald Trump and former vice president Joe Biden next week.

The two will square off from 9 to 10:30 p.m. Eastern Time, Sept. 29, at Case Western Reserve University in Cleveland, Ohio.

The live, 90-minute-long, commercial-free event will air on most major news stations, according to The Washington Post, and live-streamed on various websites including the Post’s. Fox News Sunday anchor Chris Wallace will serve as moderator.

Those are the details we know. What we don’t know is how the candidates will fair.

“What the American people want is for them to say here are the issues, here’s where you stand on the issues and here’s what you’ve accomplished,” said Barbara Nielsen, director of communications director for the Beaufort County Republican Party.

Having served as South Carolina’s Superintendent of Education for two four-year terms, Nielsen is familiar with what constituents are looking for in their elected leaders.

Nielsen said she’d rather see a discussion that focuses on policies and candidates who are specific about what they stand for.

“I’m hoping that’s what we’ll see in any debate quite frankly,” she said. “Then let the American people make up their minds. We’re smart. We can make up our minds.”

While most voters see debates as helpful, they aren’t necessarily determinative, according to post-election surveys conducted since 1988 by Pew Research Center.

In most cases, three-fifths or more of voters say the debates were very or somewhat helpful in deciding which candidate to vote for, the center found. However, that doesn’t necessarily mean that 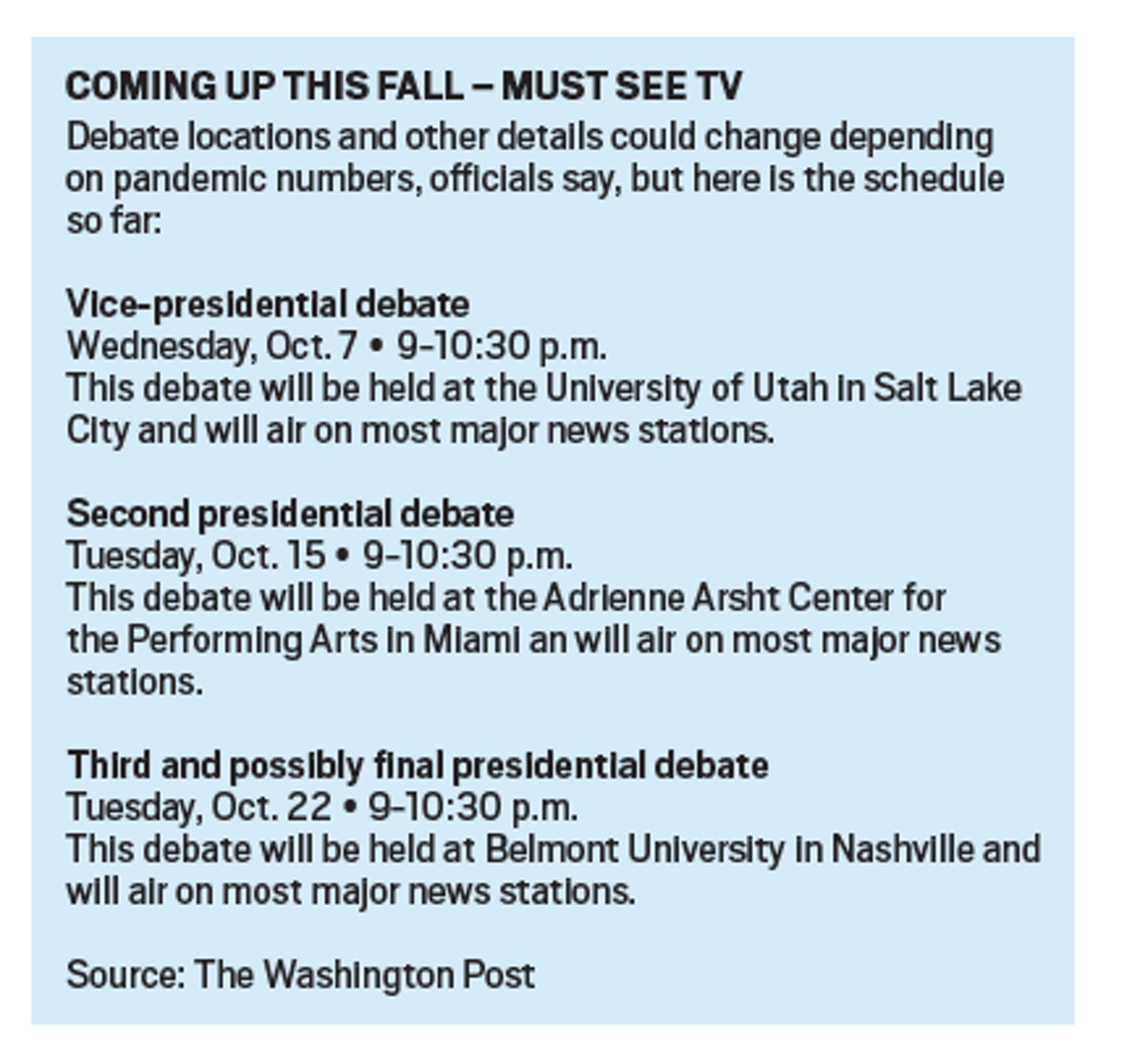 large numbers of voters are waiting for the debates to make up their minds, it also found.

Still, Nielsen thinks voters are looking forward to watching the debates this fall.

It’s also a chance for the candidates to move past the sound bites and the ads, she said.

“As a voter, I would like to see us move beyond the ads, focus on what the issues are and be fair and balanced,” she said. “And let people decide for themselves.”

Beaufort County Democratic Party Chair Mayra Rivera-Vazquez agrees with Nielsen on what the focus of the debates should be on.

“I would hope the discussion goes right to the issues,” she said, adding that those issues include how to handle the COVID outbreak and the side effects of the pandemic such as the loss of jobs, housing and access to services.

In fact, how the country is going to deal with the economy during and post-pandemic is going to be one of the election’s top issues, she said.

Filling the seat left by Supreme Court Justice Ruth Bader Ginsburg who died recently will undoubtedly be another.

Senate Republicans have said they have the votes to see the seat filled before the election. Democrats think it should be left until after the election.

Meanwhile, debates also provide a chance for candidates to demonstrate their leadership styles and differentiate themselves from their opponent, Rivera-Vazquez said.

“And to give people the opportunity to see the difference in leadership that we have in Joe Biden,” she said. “We’re going to see what a leader could be, and we are sure that that leader is Joe Biden.”