Photo above: The Conroy Literary Center is at 308 Charles St. in Beaufort. Photo provided.

Extending the experiences which began at the Pat Conroy at 70 festival and birthday celebration in October 2015, the annual Pat Conroy Literary Festival continues to honor the writing life of Pat Conroy (1945–2016) in his adopted hometown of Beaufort.

Now the signature annual event of the Pat Conroy Literary Center, the festival embraces themes from Pat Conroy’s work and expands the conversation to include larger discussions of literature, life and culture.

Taking the Transformative Power of Education as its theme, the second annual Conroy Festival will honor Conroy as student, teacher and mentor through an immersive weekend of writer panels, readings, signings, workshops, tours, film screenings, live performances, receptions, a children’s book fair and other special events.

This event is being presented in partnership with the University of South Carolina Beaufort’s Center for the Arts in historic downtown Beaufort.

“Through the character of Tom Wingo in ‘The Prince of Tides,’ Pat wrote that there was ‘no word in the language I revere more than teacher,’ and this year’s festival is our opportunity to honor some of those teachers who meant so much to Pat, to celebrate Pat’s own role as a teacher and student in and well beyond the classroom, and to reflect on the many ways in which education shapes and reshapes all of our lives,” said Jonathan Haupt, the Conroy Center’s executive director and the founding director of the annual Conroy Festival.

“Writing was an act of teaching for Pat, and teaching for him was always an act of love — of great love. Our festival will honor that aspect of Pat in the stories we share this year.”

Festival highlights include a tour of the former Beaufort High School where Conroy was a student and teacher; a screening of “The Lords of Discipline” followed by a panel discussion with some of his Citadel Class of ’67 classmates; a performance of the musical “Conrack”; an exhibition of photographs by Billy and Paul Keyserling documenting Conroy’s Daufuskie Island teaching experience; the debut of a new short film by Luke Parker Bowles about the Conroy Center; and appearances by Conroy’s teachers William E. Dufford and Nathalie Dupree, his students Sallie Ann Robinson and Valerie Sayers, his widow and fellow novelist Cassandra King Conroy, his brother Tim Conroy and daughter Melissa Conroy.

The festival will also include the launch of the paperback edition of “A Lowcountry Heart,” the posthumously published collection of short nonfiction by Pat Conroy; of “Geographies of Terrain,” the first book of poetry from Conroy’s brother Tim, a retired special education teacher; and of “My Tour through the Asylum: A Southern Integrationist’s Memoir” by William E. Dufford, Conroy’s Beaufort High School principal and a force for positive change in integration and diversity education in South Carolina.

Visit the Pat Conroy Literary Festival’s new website for a wealth of information about the weekend’s schedule, presenters, ticket options, sponsors, travel recommendations, and select free events on Thursday and Sunday of the festival weekend: www.patconroyliteraryfestival.org. 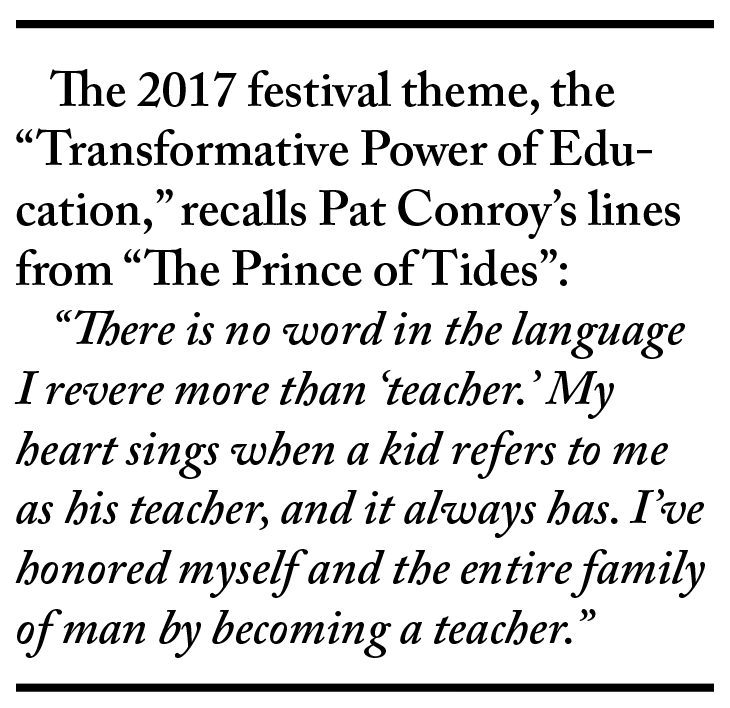 The Pat Conroy Literary Center has been newly selected as an affiliate of the American Writers Museum, the first site in South Carolina to receive this national designation.

“For our Conroy Center to be approved as an AWM affiliate on the basis of our first year’s worth of public programming and operations speaks volumes about all that we are doing here in Beaufort and beyond to continue Pat Conroy’s literary legacy.” said Conroy Center executive director Jonathan Haupt.

“It’s a tremendous honor for everyone who supports the Conroy Center. And we’re in good company with the constellation of our fellow AWM affiliates across the country.”

The American Writers Museum Affiliates Program fosters collaboration among American author museums and homes to increase interest in the works of great American writers and to expand the public knowledge and appreciation for their unique contributions to our nation. To date, just over 70 sites nationwide have been selected for AWM affiliate status.

The Digital Corridor: swimming against the tide