Few symbols are as recognized worldwide as a karate black belt.  It’s the undeniable mark of a disciplined, dedicated and capable martial artist. On Saturday, Oct. 20, 12 students from Beaufort’s Club Karate tested for and were promoted to the rank of first-degree black belt in the Chuck Norris System. A crowd of family, friends, and fellow students was on hand to observe and support those testing during the four-
hour ordeal. 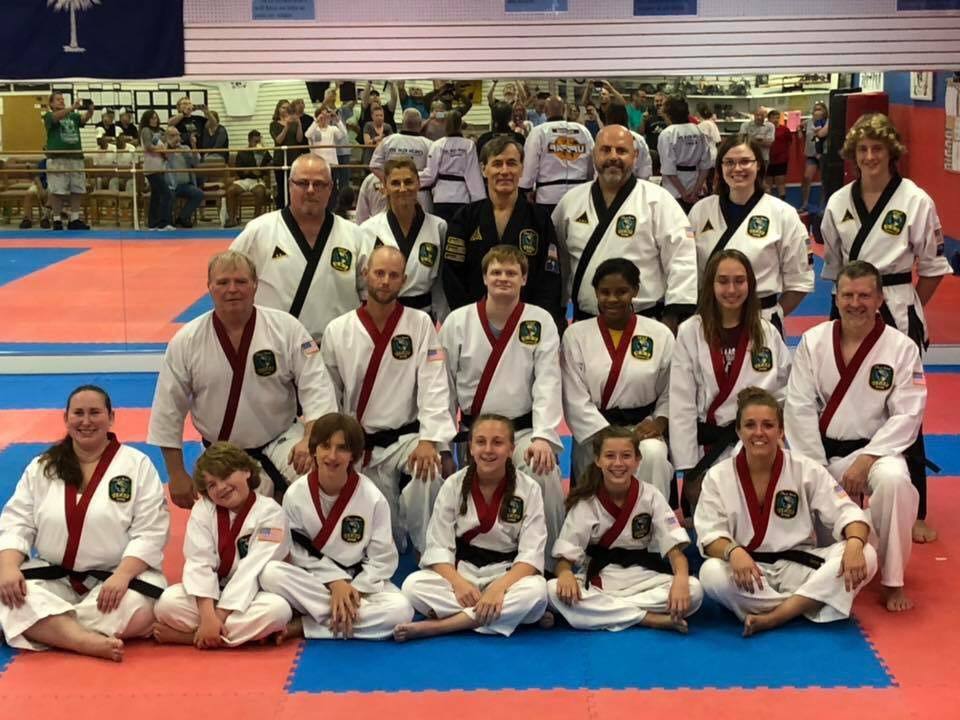 The Chuck Norris System is an American martial art founded by Chuck Norris. The United Fighting Arts Federation (UFAF) is the organization that oversees Chuck Norris Karate, and it leads more than 90 schools nationwide and internationally. UFAF provides technical standards for instruction and certifies student ranks and instructor credentials in the Chuck Norris System.

To obtain their black belts, the Club Karate students demonstrated their formidable skills before a board of six higher-ranking UFAF black belts.  Club Karate owner and chief instructor Master Chuck Elias, an eighth-degree black belt, was head judge among those critically grading the performance of the black belt hopefuls.  One of the demanding requirements of the test was that each candidate had to fight Master Elias himself.  Another requirement was that each candidate write an essay about what karate training has meant to them.

Kylie Rast, 12, was the youngest student to test. She said that karate helps her be more disciplined, focused, and confident, and that those traits benefitted her not just in class, but in her life. Kylie is more confident knowing she is able to defend herself and her friends if someone or something bad happens.

“I don’t give up at something that I am new at,” she said. “I stay positive and spread that feeling to everyone, my teammates, even my opponents.”

Dr. Kurt Ellenberger, 48, is a local pediatrician, and he tested alongside his 13-year old son, Sawyer.  Dr. Ellenberger enrolled his children at Club Karate, then found himself impressed and energized by Mr. Elias’ patient and dynamic teaching with the kids.  That inspired Dr. Ellenberger to start training, too.

“I found that the core group of students I trained with became a cohesive team of coaches, comrades, and confidants, people whose mutual support carried us through and over personal obstacles and limitations to achieve our black belts together,” he said.

Sawyer Ellenberger said karate training helped him learn to remain calm and focused, to feel confident and comfortable.  He learned how to persevere to the best of his ability, which helped him reach goals and overcome challenges, and mentioned the deep friendships he’s developed while training. Sawyer’s dad makes clear that karate provides stress relief and physical fitness, builds confidence and discipline, and blends camaraderie and personal achievement. On Saturday, they were both promoted to black belt.

“I have the privilege to crest this peak with my eldest son, creating an indelible memory and bond which can never be broken,” Dr. Ellenberger said.

R.J. “Frenchy” Levesque, is a 65-year old retired pilot and Marine.  The most seasoned of the black belt awardees, he began training when he was almost 60 years old.  He’s powerful on the mat.  During the test, he was partnered with Dr. Ellenberger, and the controlled violence they demonstrated left observers in awe.

“As a mature adult, the Chuck Norris System has benefited me with cardiovascular improvement, muscular strength, increased flexibility, better balance, and improved self-esteem and confidence,” Levesque said. “It has also helped me spiritually. I’m able to focus on being a better person, husband, father, grandfather and stay in line with my religious beliefs as well.  As a veteran it gives me great pride and honor to be associated with the Chuck Norris System, particularly with the patriotism, morals, values, integrity, ethics and character it instills in our youth.  Ethics like develop yourself, forget the mistakes of the past, be in a positive frame of mind, continually work to improve, look for the good in others, be enthusiastic about the success of others, be open-minded, respectful, loyal and goal-oriented.”

These 12 students achieved a milestone in their lives.  Dr. Ellenberger surely speaks for them all when he points out that, initially, looking up from below, the rank of black belt seemed like the top of the mountain, a pinnacle achievement.  But he and those who made the climb with him know now that reaching black belt is truly only a solid base camp, and there is greater martial understanding and ability in the yet to be scaled
heights above.

For more information, contact Club Karate at 843-252-7283, or visit www.clubkaratellc.com.