The Burton Fire District Firefighters have taken on a new fight during the month of October by promoting breast cancer awareness with new pink duty shirts. 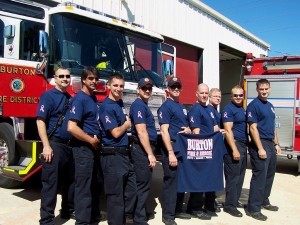 It is estimated that more than 250,000 woman will be diagnosed with breast cancer, affecting one in eight woman. While the fatality rates from breast cancer have been declining by 2% each year, sadly almost 40,000 women will lose the fight. Screening and early detection are the keys to survival and why firefighters have chosen to increase awareness — to save lives.
“We came into the fire service to help people and make a difference,” stated Burton Firefighter Paramedic Daniel Byrne, “and if we influence one person to get screened, we’ve done our jobs.” Firefighters state that working day in and day out with sick and dying people motivates them to do more for prevention. “Women do not have to die from this.”
The pink T-shirts, paid for by the firefighters themselves, will be worn by all on duty Burton fire crews during the month of October. This year they have dedicated their awareness campaign to Theresa Manning, a local Beaufort school teacher who was diagnosed with breast cancer in 2009 and is a survivor. Burton Firefighter John Perry presented her with a shirt.
Burton firefighters urge all women to undertake screening when their physicians recommend, and encourage their friends and family to do the same. “A simple test can save a life,” stated Byrne.

A year later, remembering my mom’s battle with cancer

A sense of community

Good food, fellowship to be found at local community Thanksgiving dinners By Delayna Earley If you

And, oh, the pies… By Bob Sofaly  After a two-year hiatus because of COVID concerns, the