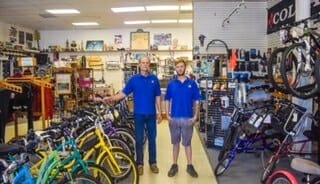 Lowcountry Bicycles Inc. is celebrating 30 years of business this year, and like the community, it has changed and grown.

“Thirty years ago, I was looking for a business that combined the loves of my life: biking and being on the water,” said store owner John Feeser.

Beaufort didn’t have a bike shop and Feeser saw an opportunity to capitalize on what he predicted would be a growing market.

“When we opened in 1987, there were no share-the-road signs in the county, there wasn’t a hint of a bike path anywhere and the Spanish Moss Trail wasn’t even in the planning stages,” Feeser said.

The Spanish Moss Trail, on whose advisory board Feeser serves, now stretches 16 miles from the Port of Port Royal inland and draws hundreds of bikers, walkers and runners daily.

And as the county has grown, population-wise, especially in the retiree area, Lowcountry Bicycles has grown.

“We’re seeing what bike shop owners throughout the country are seeing – more retirees looking not just for additional ways to remain healthy but as a form of socialization,” Feeser said.

“This is also a growth area for young families and the military (home of Parris Island Marine Corps Recruit Depot and the Marine Corps Air Station Beaufort), communities that support us as we support them.”

The business opened in downtown Beaufort within the city’s historic district, but within a few years it was apparent more space was needed and a move was made across the bridge to Lady’s Island. The new space allowed for expanded merchandise, which includes Jamis, Electra and Felt.

Feeser, who began his professional bicycle experience in Spartanburg, said the key to Lowcountry Bicycles’ success has been customer service.

“If you’re going to work in this business, especially in a smaller town, you have to be a people person and you have to love the sport,” he said.  “I want my customers to be treated the way I expect to be treated.”

“But if you welcome every customer that comes in your store and offer professional services not available elsewhere, we just may survive. And of course, we have to say thanks to our loyal friends and customers for the first 30 years,” he added.

Retirement income threats – how should you respond?

When the daily news is filled with discussions about inflation, interest rates, market volatility, and endless