Who gets more tickets in the Lowcountry, minorities or whites? And who gets a pass?

When Lisa Allen got the most recent data back from the City of Beaufort earlier this year, she was pleased by what she saw in one set in particular.

For Allen, a former news journalist and founder of the Citizens Task Force for Law Enforcement Accountability, the 20-point difference was a positive trend that also piqued her natural curiosity.

“Having dealt with data for years, whenever you get a statistically significant change in data, one wants to know the reason why,” she said.

While it remains unclear why the swing occurred, Allen said any number of factors could have caused the change – from police officers doing something differently while out on patrol to the population behaving differently.

At the same time, the data also showed an increase in the number of warnings given to Black residents, which suggested officers were giving this population the benefit of the doubt, Allen points out.

Either way, it’s all part of what she and the 30-plus member task force has set out to look at as part of the group’s mission to increase the trust, collaboration and communication between residents and law enforcement.

The number of traffic stops, citations and warnings are part of a larger pool of data the group asked the agencies to make public. Since then, the task force has received nearly all of the data requested from the four major law enforcement entities in the area.

That in itself is saying something, Allen said.

“No one likes to have someone looking over their shoulders,” she said. “This is new to a lot of the local law enforcement agencies, and overall they’ve all been very cooperative and understanding of the need to provide this information to the community.”

Citations and warning numbers, and more importantly who is receiving them, can be particularly compelling to examine since law enforcement officers have some level of discretion in this area, both Allen and agency heads noted.

The task force also strives to understand exactly what the numbers mean and provide context where needed.

For example, in the data provided, a warning is generally counted as something given to one individual. However, an individual can actually rack up multiple citations during one incident. For instance, if someone is stopped and given a ticket for speeding, he or she may also be ticketed for something else such as a suspended license.

The city and county do not currently provide a breakout of the numbers of people who have received citations since that isn’t something easily provided or would require matching thousands of individual data points, Allen explained.

That’s why it’s important to note when looking at the data provided for citations, those numbers don’t represent individuals but the total number of citations given, she said.

In addition, the task force believes that the benefit of the doubt, whether issuing a warning or a ticket, should be extended to everyone equally, regardless of race.

“Unintentional bias does occur, and we want to make sure that all of our officers are trained to be aware of it,” he said in his statement included in the task force’s February report.

Another caveat in comparing the data to a group’s population numbers, as the task force is doing, is to note that those who are stopped, ticketed or warned are not necessarily residents. They may be visitors or just passing through the area.

It’s something that every jurisdiction has pushed back on, Allen said, since chiefs and division heads often say residents aren’t the only population they are policing.

“And it makes sense,” she concedes, noting that compared to Beaufort’s population of just more than 13,000 people, the number of people passing through the city on any given day can easily reach 60,000 vehicles, according to both the city and S.C. Department of Transportation data, Allen said.

But the task force does take into consideration Beaufort’s visitor and tourism-related traffic, including those attending Parris Island’s Marine Corps graduation ceremonies.

Still, it has to have some benchmark to start with, she said, adding that’s why she frequently includes the populations and demographics of surrounding areas as well.

“That’s why I’ve pulled the lens back to even reflect Chatham County, which includes Savannah. Chatham County is only 40 percent African American, so there’s no jurisdiction within an hour’s drive of the City of Beaufort that is a majority African American with the exception of St. Helena Island and Hampton County,” she said.

So how are other jurisdictions in Beaufort County doing in terms of citations and warnings?

In the county, when it comes to the number of warnings given compared to their share of the population, White people are much more likely to be given a pass, Allen noted.

In Bluffton, data provided by the Bluffton Police Department also showed while White people received half of all citations issued and over 60% of all warnings issued for 2020, people of color received citations at a greater proportion than their population in the community. 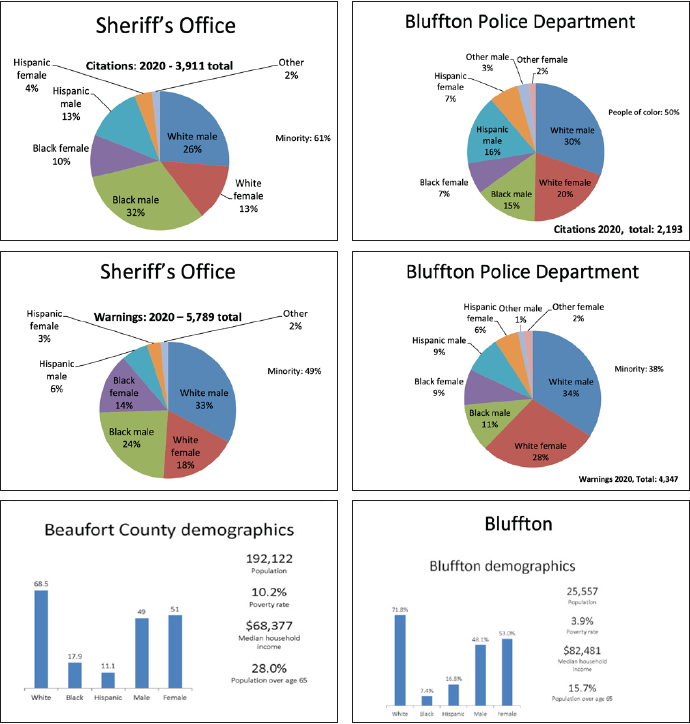 However, the numbers of warnings people of color received more closely aligned with their population’s numbers, suggesting that officers were giving those in this group the benefit of the doubt, Allen said.

Still, the most compelling data comparison here was the number of warnings and citations overall given with a larger share of the warnings given to White people, Allen noted.

Officials with both the sheriff’s office and town of Bluffton have stated they enforce laws impartially and practice non-bias policing.

“We are confident that the outcomes of our traffic stops are the result of ethical and duty-bound policing,” Sheriff PJ Tanner said in his statement included in the task force’s report.

“We hold our deputies to a high standard, backed by strong policy and adherence to professional accountability. We remain open to discussions that help us achieve our mission of better understanding and addressing the diverse issues affecting Beaufort County,” he said.

Allen said it’s also important to note there are “many factors” that impact why some populations encounter law enforcement more often than others – poverty, laws targeting specific populations, unintentional bias or systemic barriers may all contribute.

“…It likely extends far beyond law enforcement. Many in our community, including those who commute into the county to work, face disproportionate challenges regarding stable housing, quality education and job opportunities. This is just one aspect of a much larger problem,” she said.

Where is the task force’s work now?

Since meeting with the police chiefs and heads of all four of the area’s major law enforcement jurisdictions, all have provided much of the data the task force has requested such as citations, warnings, arrests, numbers and demographics of sworn officers, use of force numbers and type and citizen complaints.

In addition, both the City of Beaufort and Town of Bluffton’s police departments have taken steps to post their data on their respective websites for greater public access, which the task force has commended.

“Those two are doing a great job,” Allen said.

The task force hopes that by continuing to track and monitor the data, the findings will lead to more community discussions on ways to increase law enforcement effectiveness and impartiality.

“In order to have an inclusive, fair society, public officials and the public can’t make assumptions based on anecdotes and beliefs,” Allen concluded in a release earlier this year.

“We want our leaders to use facts to guide us toward a community that treats everyone with respect and offers opportunities equally,” she said. “Gathering and posting data on a regular basis can help them – and us – do that.”

NEXT UP IN THIS SERIES

A closer look at some of the area’s arrest data and how the area’s numbers compare to national trends.

The Island News takes a look at the work of the Citizens Task Force for Law Enforcement Accountability, created in 2020, and their findings.

WHAT IS THE CITIZENS TASK FORCE FOR LAW ENFORCEMENT ACCOUNTABILITY?

A grassroots, community based group, the Citizens Task Force for Law Enforcement Accountability was formed last July by county residents in response to the death of George Floyd at the hands of police in Minneapolis and the worldwide protests that followed. The task force is guided in part by recommendations from the 2015 President’s Task Force on 21st Century Policing.

The group’s mission is to “increase the trust, collaboration and communication between residents and law enforcement, which in turn will make everyone — officers, deputies and residents — safer.”

The task force also wants to “improve the transparency of Beaufort County’s police and sheriff departments’ policies, training, and staffing, as well as track traffic stops, arrests, use of force, citizen complaints, and in-custody injury or death by age, gender, and race.”