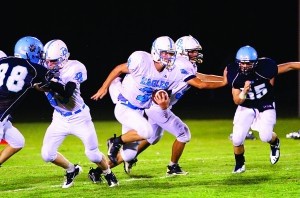 The Beaufort Academy football team played well during their first home game of the season on Friday, September 2, despite a final score of WW King 48 and BA, 34.  This was also the first game on the newly renovated Merritt Field, a project that took numerous donations and nearly the entire summer. Beaufort Academy had 290 yards of offense by halftime and only trailed 28-22, but the visitors pulled away in the third quarter of the SCISAA 8-man contest.
Quarterback Gibson Achurch had a huge night, going 13 for 14 passing for 259 yards and two touchdowns. Jack Griffith had seven receptions for 161 yards and a TD. He also had two TDs rushing. Billy Dailey and Ray Aiello added TDs for Beaufort Academy (0-3), which also got a two-point conversion from Tucker Trask.
Griffith led the defense with 12 tackles, and Dailey added 10. Adam Chahin had six stops and a fumble recovery for the Eagles, who host Jefferson Davis on Friday.

By Mike McCombs Along with the ideal temperatures and calm waters, Hilton Head Island High School

By Justin Jarrett, LowcoSports.com One of the most successful high school boys basketball programs in the

By Wes Kerr LowcoSports.com  Beaufort High led a strong showing from the Lowco contingent at the SCHSL