It’s 3:30 am, and the alarm clock is going off. He reaches over to it, eyes still closed and tired. It’s time to get back out there for another catch.
First he’s got to pick up his crew, and then they’ll all head over to Miss Kathy, the 33-year-old lady docked at St. Helena Seafood by the grassy shoals of the inlet.

You never know what the waters and the wind will bring. That’s just part of the salt life for a local shrimp boat captain like Kerry Abraham.
When I first set foot in the shrimp shop of St. Helena’s Seafood, the boys were shoveling ice and handling shrimp as thick as my thumb. Kerry Abraham wastes no time showing me the ropes, as though I’m the new shrimp boat rookie. He brings me straight into a large walk-in freezer, opens up a 50 pound bag of frozen shrimp and asks me, “How come they’re not frozen together?” as though he’s the reporter.

Stepping on board Miss Kathy, named after his wife, Kerry has me stick my finger in a tank of zero degree brine salt water. That’ll freeze the fresh shrimp in seven to eight minutes, and the salinity is what keeps the shrimp from freezing together.
Raised with three uncles who worked on shrimp boats, Kerry’s been in the shrimping business ever since he was a deck ant.
“First I was a nuisance,” he says, “then I learned.”
By 17-years-old Kerry had his first trawler, Miss Sherrie — the famous boat that would one day, six months after he sold it, be featured in “Forrest Gump.” In fact, he recalls watching the hurricane scene in “Forrest Gump” being filmed, describing how the film crew used water canons and pulled down on the outriggers on either side of the trawler to make it look like a worse storm.
In the case of most captains and crew, shrimping is a profession usually passed down for generations in the family. “It’s all about the head start,” says Kerry. “When I got my own boat, it was like I caught myself an education in shrimpin’.”
According to Kerry, the line ends with his generation. “Now there’s not any rookies in the business, top-of-the-line fishermen only. The fuel is killin’ us,” he claims. At 15 gallons to the mile on a 10-hour day, with the labor cost of a crew, the cost of a freezer and place to dock the boat, and the competitive prices of farm-raised shrimp, there’s no room for wasteful errors out at sea when it comes to turning a profit.
Kerry Abraham will be around because he owns his own freezer and dock and sells directly to his customers who appreciate seeing their shrimp come straight off the boat.
For customers like Sandi Carstetter of Columbia, “There ain’t nothing like this shrimp!” Sandi, along with her husband, Jeff, and children, make a trip once a year from Columbia to buy 100 pounds of Kerry Abraham’s shrimp.
However, while some agree that the taste of fresh caught shrimp can’t compete with the farm-raised shrimp that “tastes like cardboard,” as Kerry puts it, the supply of fresh shrimp simply can’t meet the demand of America’s appetite. 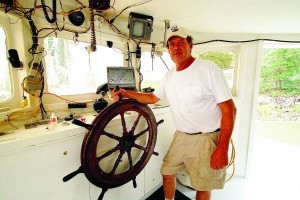 What consumers may not realize when they purchase imported farm-raised shrimp is that shrimp farms in foreign countries, such as those in Southeast Asia, host viruses and bacteria due to overcrowding and poor sanity conditions. Antibiotics, steroids and chemicals are then pumped in these shrimp pools to discourage disease.
As the former president of the South Carolina Shrimp Association and member of the Southern Shrimp Alliance (SSA), Kerry not only informed me of this information, but also that only 2% of all seafood is checked by the FDA. And, according to the SSA, “the lenient U.S. imported food safety regime and the widespread use of banned substances to increase the production of foreign pond-raised shrimp combine to make the United States market a dumping ground for likely contaminated shrimp imports.”
For shrimp boat captains there are other problems and perils, but those regard the sea.
Kerry’s taken me throughout the trawler, and now we’re in the wheelhouse where he shows me our location on the navigational radar and informs me of his daily dangers. “You’ve got heavy equipment back there. You’ve got rope you can get tangled up in, have to watch where you’re driving — don’t drive up on the sandbar,” he warns.
The by-catch isn’t an issue with the turtle excluder that keeps out sea turtles and larger fish. The jelly balls, on the other hand, are the problem. The small jellyfish, common off the coast of South Carolina, fill up the nets, making it a pain in the rear to sort through for the shrimp.
Kerry entertains with his Navy tales about the frenzies of sharks that feed behind his boat, about the porpoise that follows close-by, and the pelicans and gulls that hover. “When you’ve been doing this all your life,” he says, “the ocean is like a road.”
He knows the dips and valleys of the ocean floor, and he certainly knows his shrimp. I realize that a keen fisherman is much like the scientist: he catches his shrimp because he observes them day after day and questions their behavior. He knows which way the shrimp move according to the wind and the cycle of the moon. He’s traveled as far south as the Mississippi because he knows shrimp will travel to warmer waters, and he knows not to bother going out when the water is rough because shrimp don’t like rough waters. He can even tell you how a shrimp’s taste will change depending on the time of the year and the temperature of the water.
“In the winter, when the water’s real cold, the brown shrimp get a sweet taste, like you poured sugar on them,” he says, spoken a true shrimp boat captain.