A Lady’s Island man who was involved in two different crimes in April 2016 has been sentenced to 10 years in prison.

Maurice Laron Jenkins, 23, pleaded guilty on Oct. 9 to strong armed robbery and to pointing and presenting a firearm.

On April 21, 2016, Jenkins, who was armed with a pistol, forced the driver of a 2009 Chrysler to the ground and stole a subwoofer speaker while at Jenkins’ Lady’s Island home. In a separate incident a few days earlier, Jenkins pulled a gun on two men who were in a vehicle on Detour Road in Seabrook.

“In the pointing and presenting case, the victims were able to drive away and escape any further injury,” Assistant Solicitor Dustin Whetsel said. “As prosecutors we are required to evaluate each case individually, but this defendant demonstrated a clear pattern of behavior.”

Beaufort County Sheriff’s Office deputies responded to the scene and said one man was suffering a gunshot wound inside the home, where there were also other adults and children.

Deputies and investigators said they found numerous bullet holes in the home and around the area.

A motive and suspect have not been discovered, and the condition of the victim was not available.

Anyone with information in reference to this incident is asked to call the Beaufort County Sheriff’s Office Dispatch at 843-524-2777.

A man is facing several charges after a shooting at a fish market on Oct. 13 on Hilton Head Island.

According to the Beaufort County Sheriff’s Office, at about 3 p.m. sheriff’s deputies responded to a report of shots fired at Barnacle Bill’s Seafood on U.S. 278.

Witnesses and victims reported that following a verbal dispute, an unknown man fired several shots from a shotgun, striking two vehicles and the structure of the business.

After firing the shots, witnesses said the man got into a white Ford Crown Victoria and sped off traveling west on U.S. 278.

Deputies spotted the white Crown Victoria in the area of Gumtree Road and followed it over the Hilton Head bridges into Bluffton. Deputies attempted a traffic stop as they neared Tanger One outlet stores, but the driver sped up.

The driver continued onto numerous side streets in Bluffton and sideswiped another car.

Ultimately, the man collided with a Bluffton Police Department vehicle on Bluffton Parkway east of Burnt Church Road. The driver then ran away.

The Bluffton Police Department officer who was hit released his patrol canine to pursue the man.

The suspect, identified as 30-year-old Calvin Murray Jr., of Hilton Head Island, was quickly apprehended by the canine and taken into custody by law enforcement. The shotgun Murray Jr. allegedly used during the Barnacle Bill’s Seafood incident was recovered from his Crown Victoria.

Murray Jr. has been charged with failure to stop for blue lights and fleeing to evade. He was also served with two active arrest warrants for assault and battery in the third degree and malicious injury to property in a separate incident.

After being taken to the Beaufort County Detention Center he was charged with two counts of attempted murder, two counts of malicious injury to property, possession of a firearm in the commission of a violent crime and discharging a firearm within town limits.

Just before noon on Oct. 12, the Burton Fire District responded to Whale Branch High School for an injured worker who fell from the roof.

After a brief search of the roof Burton fire crews and school personnel located the injured worker who stated he fell from a ladder. While the worker appeared to have non-life threatening injuries, the injuries prevented removing him by the stairs. Beaufort County EMS personnel began providing medical attention on the roof while firefighters prepared to remove him.

Burton firefighters placed the worker on a backboard and secured him to the aerial ladder that was extended to the roof.

The worker and a Burton firefighter were lowered to the ground to a waiting Beaufort County ambulance. 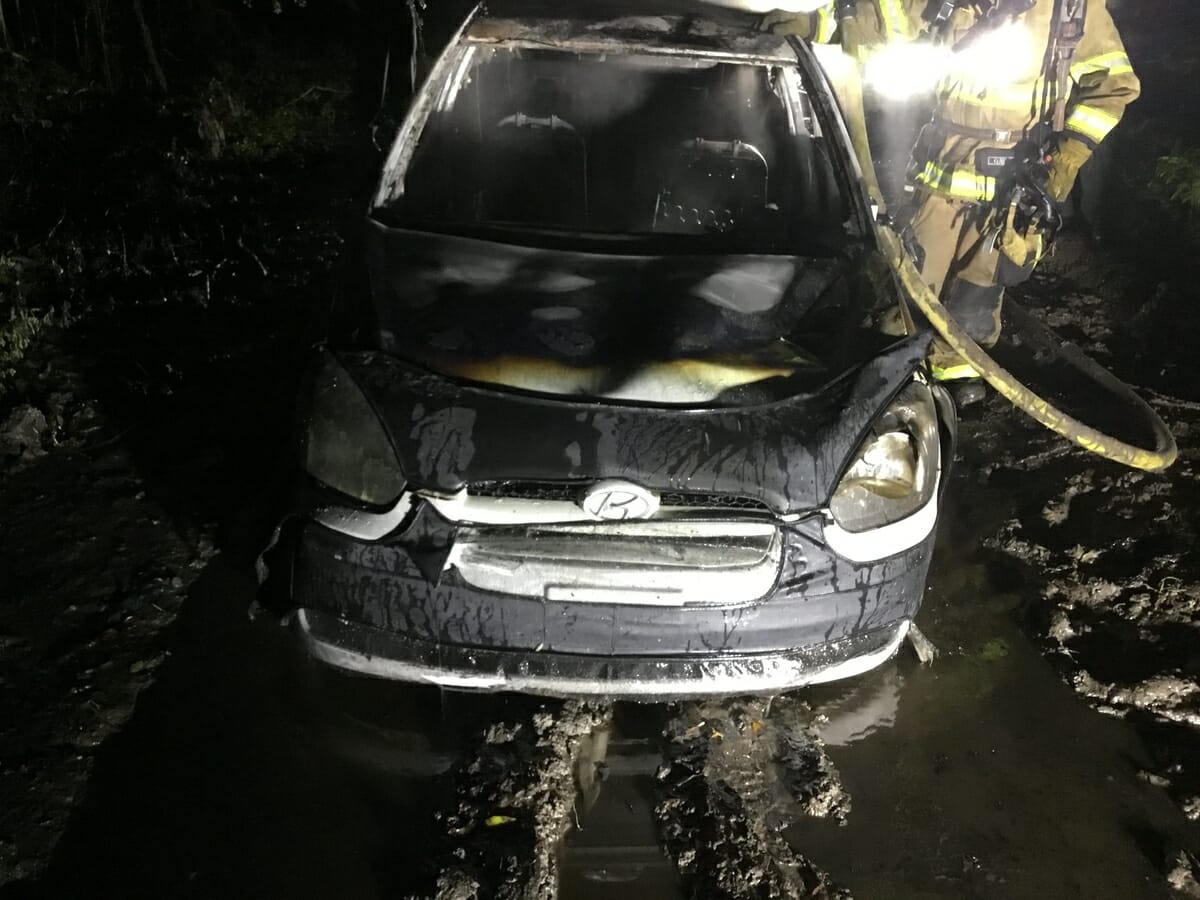 Just after 5:30 a.m. on Oct 10, a passerby called 911 to report a possible brush fire in the area of the Beaufort County Solid Waste and Recycle Convenience Center by the intersection of Grober Hill Road and Castle Rock Road.

Firefighters arrived to find flames coming from a Hyundai Accent passenger vehicle in the tree line off a utility road.

While overcoming challenging terrain including a muddy trail, trees and brush, Burton firefighters were able to extinguish the fire in less than 15 minutes and search the vehicle for possible victims.

There were no victims found and no injuries reported.

The Burton Fire District has responded to 19 vehicle fires in 2017, and in 2016 Burton firefighters extinguished 24.

Keener is named officer of year

The Exchange Club of Beaufort recently named Lance Cpl. John “Jack” Keener of the Beaufort County Sheriff’s Office as the 2017 Law Enforcement Officer of the Year in a ceremony at the annual Sheriff’s Department Picnic held at Widgeon Point.

Keener was presented the award by Exchange Club Immediate Past President Janet Horton.

Keener was awarded for going above and beyond his regular duties in an incident aboard MCAS Beaufort during the 2017 MCAS Beaufort Air Show when a man handed him a 2-year-old child that was choking with something lodged in his throat.

Keener immediately performed an emergency procedure to help the toddler. He was able to clear his airway and the child was saved.

For 30 years the Exchange Club of Beaufort has been honoring a First Responder, Firefighter and Law Enforcement Officer of the Year.

The award ceremony was originally planned for Sept. 11 at Henry C. Chambers Waterfront Park but was cancelled when Tropical Storm Irma came through the area.